Apple is researching adding Touch ID and an under-display camera to the Apple Watch, according to two newly-published patent applications. 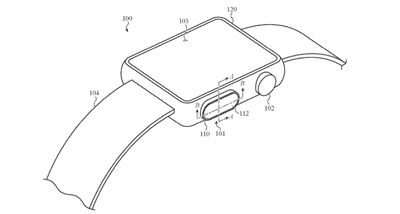 The first patent, granted by the U.S. Patent and Trademark Office, was spotted by Patently Apple and is titled "Electronic device having sealed button biometric sensing system."

In short, the filing explains how a ‌Touch ID‌ fingerprint scanner could be integrated into the Side Button of an Apple Watch and what practical purposes it could serve:

The processor may apply the biometric identification for any of several purposes; for example, user identification, device unlocking, and application authorization.

It is easy to see why Apple could add ‌Touch ID‌ to the Apple Watch. Currently, the Apple Watch is dependent on use of a passcode and does not promt for it again until the device is removed from the wrist. Biometric authentication would allow Apple to guarantee Apple Watch users a superior level of security when putting on the device or making an Apple Pay transaction.

The implementation is extremely similar to the Power Button-based Touch ID sensor introduced on the fourth-generation iPad Air, which has also proven that the technology has shrunk over time and Apple continues to be interested in it for commercial applications.

The second filing, spotted by AppleInsider, is titled "Electronic devices with two-stage displays." It outlines how a display can be layered to contain a camera and a flash which are only externally visible when needed.

The two-stage display technology would also work for other devices such as the iPhone, thereby eliminating the notch, but interestingly, the patent focuses on the Apple Watch.

The technology works by layering a pixel array for displaying images and an outer layer with an array of light modulator cells that can become transparent or block out light. Some of these cells "may be placed into a transparent mode to form a window" to allow the camera to function.

When it is desired to capture images, control circuitry in the electronic device may temporarily place the shutter in a transparent mode to allow light from a flash and/or light being imaged by the camera to pass.

This two-stage display solution has the added benefit of each layer being able to react differently. For example, one layer could be fast-reacting for video or animations, while another could be slower for displaying static images or text. This may also improve the Apple Watch's battery life.

Although the patents do not necessarily reveal Apple's immediate plans for the Apple Watch, they do offer an interesting insight into what the company is researching and developing. Adding ‌Touch ID‌ and a camera would certainly present a major upgrade from current Apple Watch models.

In an interview last week Apple CEO Tim Cook hinted that more sensors could be coming to the Apple Watch, potentially giving these patents more weight. Asked about the future of the product, Cook said Apple is still "in the early innings" with the device, noting that the company is testing "mind blowing" capabilities in its labs. "Think about the amount of sensors in your car," said Cook, adding "and arguably, your body is much more important than your car." It is yet to be seen if ‌Touch ID‌ and a camera will be added to the Apple Watch any time soon, but it is not difficult to imagine Apple implementing them at some point in the future.

Please make it round, square watches are ugly. I hate the aesthetic.

Seems pretty unlikely (in the short term at least) for a number of reasons: 1 - It's identifiable as an Apple Watch/Apple device when you see something that's a squircle, 2 - Square is better for information density, 3 - App compatibility and not having to have a bifurcated system of apps, 4 - Continued band compatibility, although I suppose they might be able to design a circular watch in such a way with some mounts or something that they could make it work. That said, if Apple gets the Watch to a certain maturation point and they want to freshen it up and appeal to a different segment, I could see them doing it eventually. It just seems unlikely to be anytime soon.
Score: 9 Votes (Like | Disagree)

Rogifan
So what’s the point of Touch ID here? Replacing the passcode? How often does someone have to type the passcode on their Watch?
Score: 4 Votes (Like | Disagree)

Apple_Robert
I would be inclined to buy the watch just for the Touch ID option.

Tim, please release it next year.

djlythium
tID seems redundant and unnecessary for the Watch.
Score: 4 Votes (Like | Disagree)

Huge step backward. You put the thing on and enter your passcode once and its authenticated as long as it remains on your wrist. At most you are asked to double click the side button to confirm some things, and we've seen from other a devices that adding bio auth doesn't necessarily replace that.

I was thinking the same thing. I hope they make this an optional layer of security. “Light” security being the passcode if it leaves the wrist, and Touch ID if you want “heavy” security
Score: 3 Votes (Like | Disagree)

Please make it round, square watches are ugly. I hate the aesthetic.

I hope Apple never makes a round watch. It is the square shape which makes it unique and is also useful.

Traditional analog watches were round because the extra corners are useless similar to the Apple pizza box.
For a smart watch a square display is very useful for viewing content.

Monday August 23, 2021 3:14 am PDT by Sami Fathi
Despite having tested and worked on the technology, Apple has decided not to include an under-screen Touch ID sensor with the upcoming iPhone 13, continuing to leave customers with Face ID as the only biometric authentication option for the iPhone. Apple had been testing Touch ID technology that would have allowed the company to place the sensor under the display on the iPhone, allowing...
Read Full Article • 441 comments