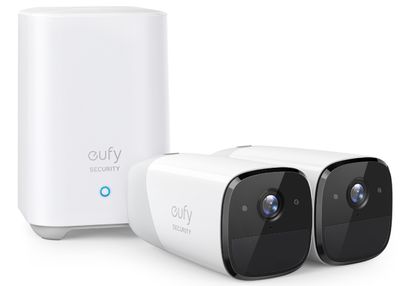 Priced at $349.95, the eufyCam 2 Pro features a 2K resolution and a 140 degree field of view for sharp wide-angle video. The setup comes with a home base required for operation along with two cameras to use in the home.

With ‌HomeKit Secure Video‌, video footage is encrypted and stored in iCloud rather than on servers handled by Anker. Footage can be viewed in the Home app, and all motion and people detection is done on-device for privacy purposes.

eufyCam 2 Pro offers customizable notifications, two-way audio support, and night vision in infrared and color. There's a built-in battery that is designed to last for up to 12 months before it needs to be recharged.

In addition to being available from Apple, the eufyCam 2 Pro can also be purchased from Amazon at the same price point, plus Amazon has add-on cameras for $150 each.

Trik
This is a bit of a buzzkill:

hellosil
If the cameras had a power cord it would have been better.
Score: 4 Votes (Like | Disagree)

Please be aware that you can only connect at 1080 resolution instead of 2K which is advertised ... Eufy claims this is a limitation of HomeKit.

This is actually pretty confusing because up until "4K", we used to refer to the vertical resolution (480, 720, 1080). Now they switched it to describe the horizontal resolution, I assume because some marketing knob found a cheap way to double the number used without actually changing anything.

EDIT: Now I see the actual resolution of this camera is 2304 x 1296...which is weird. A bit above 2K but not 4K either. So maybe that's what Apple TarHeel meant, it only gives you 1080 lines through Apple Home, but 1296 if not. I wonder why Apple would make that restriction, maybe they only support standard resolutions for encoding and since this is non-standard it can't work?
Score: 4 Votes (Like | Disagree)

iapplelove
These can’t be hard wired?
Score: 3 Votes (Like | Disagree)

icanhazapple
I'm looking for cameras which can be AC powered, which are resilient to winter outdoors, and use HSV. From my search, this doesn't exist.
Score: 3 Votes (Like | Disagree)

I'm looking for cameras which can be AC powered, which are resilient to winter outdoors, and use HSV. From my search, this doesn't exist.

Exactly my experience.
Privacy + weather proof + no maintenance isn't too much to ask from an outdoor camera protecting a home.
Weirdly the tech world hasn't produced a proper solution yet.

HomeKit Accessories Worth Checking Out

Tuesday November 23, 2021 7:06 am PST by Juli Clover
Every so often, MacRumors videographer Dan rounds up some of his favorite home products that he's been using. We have another installment of our HomeKit series, this time featuring devices from Lutron, Belkin, Sonos, and more. Subscribe to the MacRumors YouTube channel for more videos. You can see everything in action in the video, and we have links and a short description for the HomeKit...
Read Full Article • 94 comments

Tuesday January 4, 2022 8:00 am PST by Juli Clover
Linksys today announced the launch of its newest WiFi 6 router, the Hydra Pro 6. Priced at $300, the Hydra Pro 6 is meant to deliver fast, reliable, and secure connectivity for those working and learning from home. The Linksys Hydra Pro 6 supports more than 30 devices per node and offers 2700 square feet of coverage, so it's able to cover even larger homes. Intelligent Mesh technology allows ...
Read Full Article • 36 comments