The new M1-equipped MacBook Air, MacBook Pro, and Mac mini are each equipped with two USB-C ports that support USB 4 and Thunderbolt, but as it turns out, Apple is continuing to use Thunderbolt 3 rather than upgrading the new models to Thunderbolt 4. 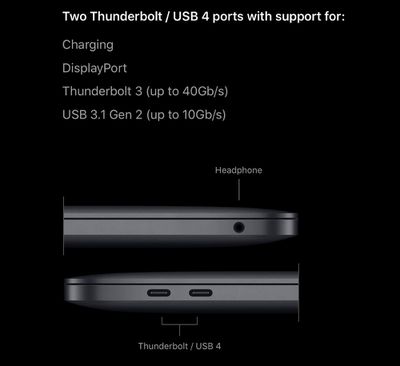 Intel in July shared details on Thunderbolt 4, which is coming out in new PCs with Tiger Lake processors. Thunderbolt 4 offers the same 40Gb/s maximum speeds available through Thunderbolt 3, but it does bring some notable improvements, such as support for docks with four downstream Thunderbolt ports. From Intel:

Intel has also designed new cables that support Thunderbolt 4 and USB 4, with longer lengths that don't compromise the 40Gb/s speeds. Thunderbolt 4 uses the same physical USB-C connector design, and Thunderbolt 4 ports and cables are backward and cross-compatible with USB 4, Thunderbolt 3, and other USB standards.

Apple's M1 Macs, which include the MacBook Pro, ‌MacBook Air‌, and ‌Mac mini‌, are available for purchase today and will begin arriving to customers on November 17.

jayducharme
Anyone get the feeling that these were rushed? They're more like proof-of-concepts. I guess I'll wait a bit to see what's in store for 2021. Or maybe 2022. Or I bet there'll be big improvements for 2023.
Score: 25 Votes (Like | Disagree)

Anyone get the feeling that these were rushed? They're more like proof-of-concepts. I guess I'll wait a bit to see what's in store for 2021. Or maybe 2022. Or I bet there'll be big improvements for 2023.

Hey. Watch you mouth. I have a mini that runs fairly well. I realized it feeling slower lately, but then it hit me that it was 8 years old. In the world of PCs with a 2-3 year lifespan, that is amazing
Score: 15 Votes (Like | Disagree)

kalafalas
Well duh. USB-4 supports the TB3 spec natively. They aren’t going to add intel thunderbolt controllers to Apple silicon, and will probably only gain TB4 support when it trickles down to the USB stack
Score: 13 Votes (Like | Disagree)

CWallace
Rushed? Not really. When Apple first moved from PowerPC to Intel, the form factors were identical, just the guts were changed. That we're seeing the same with the first models moving from Intel to ASi is not surprising to me.

Intel is just releasing TB4 with Tiger Lake so Apple staying with TB3 for the moment is not much of an issue, IMO. I imagine these uses an off-the-shelf TB3 controller tied into the M1 (which looks a fair bit like an A14X).
Score: 10 Votes (Like | Disagree)
Read All Comments

Sunday July 3, 2022 8:07 pm PDT by Sami Fathi
While past rumors have indicated the upcoming second-generation AirPods Pro will feature a built-in heart rate and body temperature sensor, Bloomberg's Mark Gurman has cast doubt on those rumors turning out to be true, saying instead such a feature is unlikely to come anytime soon. "Over the past few months, there have been rumors about this year's model gaining the ability to determine a...
Read Full Article • 72 comments

Monday July 4, 2022 5:50 am PDT by Hartley Charlton
Apple is working on an Apple Watch Series 8 model with a larger display, according to DSCC's Ross Young and Haitong International Securities's Jeff Pu. In October last year, Young suggested that the Apple Watch Series 8 could come in three display sizes. Now, responding to a query about the rumor on Twitter, Young claims that the additional display size joining the Apple Watch lineup will be ...
Read Full Article • 185 comments