The first iMac powered by Apple Silicon is set to arrive in the first half of next year and will feature a desktop class "A14T" chip, according to Chinese-language newspaper The China Times. 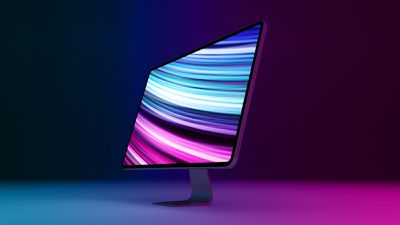 Codenamed "Mt. Jade," Apple's first custom-made desktop processor will be twinned with its first self-developed GPU, codenamed "Lifuka," both of which are being produced using TSMC's 5-nanometer process, claims the report.

In addition to the first Apple Silicon processor A14X for the MacBook, which is already in volume production using TSMC's 5-nanometer technology, according to Apple's supply chain, Apple will launch its first self-developed GPU under the research and development code name Lifuka next year, and its first desktop processor A14T under the research and development code name Mt.Jade, both produced using TSMC's 5-nanometer process.

Today's story is based on the development timeline of Apple's new A14 processors, which recently debuted in the iPhone 12 series and the new fourth-generation iPad Air, and builds on a similar report that arrived in September from the same source. It also brings forward the previously claimed launch roadmap of the first Apple Silicon iMac, and reiterates previous claims that Apple's first Arm-based Mac will be a MacBook powered by an A14X processor, codenamed "Tonga," which is already in mass production and will launch by the end of 2020. That MacBook is said to revive the 12-inch form factor in a new super-lightweight design.

Apple announced at its WWDC developer conference in June that its Macs will transition from Intel x86-based CPUs to its self-designed Arm-based ‌‌Apple Silicon‌‌ processors over the next two years. Bloomberg has said that Apple is currently developing at least three Mac processors that are based on the 5-nanometer A14 chip.

Apple analyst Ming-Chi Kuo has predicted that the first Mac models to adopt Arm-based chips will be a 13.3-inch MacBook Pro and a 24-inch iMac with a redesigned form factor, with Apple planning to launch the new models in the fourth quarter of 2020 or early in 2021 at the earliest. Prior to the launch of its Arm-based ‌‌iMac‌‌, Apple is expected to refresh the existing Intel ‌‌iMac‌‌.

Today's report also claims that Apple has already started working on an A15 series chip using TSMC's 5nm enhanced (N5P) process. The A15 will feature in next year's "iPhone 13," and like the A14 series, modified versions identified as A15X and A15T will provide the foundation for the second generation of Apple Silicon MacBooks and iMacs, with chip production beginning in the third quarter of 2021.

Apple has said it will debut the first Arm-based Mac by the end of the year, and a November event is rumored to take place on November 17.

What's all this fuss with gen1? The cpu's are already proven for years in ipads, so they are not gen1's, all the problems should come from arm macos being gen1, which will be upgradeable and gradually fixed.
Score: 22 Votes (Like | Disagree)

Well I ordered a 13" MBP last night too, although I have to say that I wouldn't be jumping in on a 1st gen one of these, anyway.

Northgrove
I'm a little surprised the Mac mini isn't going ARM early on given its lower usage in the home and industry. Sounds like a good and fairly low-impact early product for this. They have some balls to begin with laptops of all things!
Score: 16 Votes (Like | Disagree)

The dust of working software and usable bootcamp?
Score: 12 Votes (Like | Disagree)

jchandler3
Can’t say I love this, as I just ordered a new iMac last night...
Score: 11 Votes (Like | Disagree)
Read All Comments

Tuesday January 24, 2023 1:11 pm PST by Joe Rossignol
While the new Mac mini with the M2 chip has a lower $599 starting price, the base model with 256GB of storage has slower SSD read and write speeds compared to the previous-generation model with the M1 chip and 256GB of storage. A teardown of the new Mac mini shared by YouTube channel Brandon Geekabit reveals that the 256GB model is equipped with only a single 256GB storage chip, while the...
Read Full Article • 632 comments