Stock is limited, but Walmart is offering the space gray and rose gold models for preorder. According to Walmart, ‌iPad Air‌ purchases will ship out on Friday, October 23. 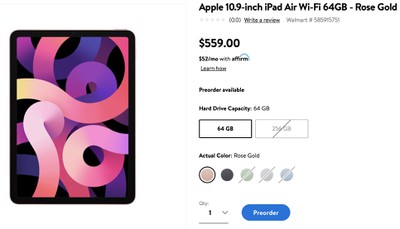 Friday, October 23 is also the release date that was temporarily listed by Best Buy's Canadian site site before it was updated to say "coming soon."

Walmart's preorders are another indication that the ‌iPad Air‌ is meant to be released on October 23, though it's not yet clear why Apple hasn't updated its site with the release date information.

If the October 23 release date for the ‌iPad Air‌ is accurate, we could perhaps see preorders from Apple on Friday alongside the iPhone 12 and iPhone 12 Pro.

The fourth-generation ‌iPad‌ Air models feature an edge-to-edge display, a Touch ID power button, and the same A14 chip that's in the new iPhones, with pricing that starts at $599. Walmart is, however, offering a $40 discount.

Update: Walmart's pre-order stock of the new ‌iPad Air‌ models appears to have sold out.

Maconplasma
Waiting for the usuals trashing Walmart when at the end of the day once you get your Apple product at home it doesn't matter where it was purchased from as long as it was from an Apple authorized seller.
Score: 7 Votes (Like | Disagree)

Some people see barely any difference between the air and pro, and they can get it for $200 cheaper. I mean what will be different, Face ID and a new display technology? Not worth the extra $200 for me, even with Lidar
Score: 5 Votes (Like | Disagree)

thadoggfather
$40 off from them aint too shabby

Waiting for the usuals trashing Walmart when at the end of the day once you get your Apple product at home it doesn't matter where it was purchased from as long as it was from an Apple authorized seller.

especially if you dont have to go into a Walmart
Score: 5 Votes (Like | Disagree)

Gurl, you’d be amazed. The vast majority of people don’t care about Pro features. They just care for what looks cool and has the lowest price point. This model will most likely outsell the Pro for years to come.
Score: 4 Votes (Like | Disagree)

Plenty of people will buy this I am sure.
Score: 3 Votes (Like | Disagree)

Are you kidding?
Score: 2 Votes (Like | Disagree)
Read All Comments