Apple is no longer selling headphones and wireless speakers from companies like Sonos, Bose, and Logitech, as it prepares to launch a new, lower-cost HomePod and AirPods Studio headphones. 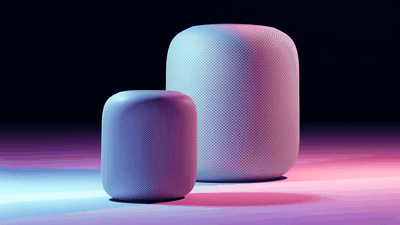 According to checks performed by Bloomberg, Apple removed headphones and speakers from Bose, speakers from Logitech's Ultimate Ears brand, and Sonos speakers from its online Apple Store at the end of September. Searching for these products, which were previously sold online and in retail stores, brings up no results.

Employees at Apple retail locations have also allegedly been asked to pull third-party audio products from shelves over the course of the last few days. Retail stores and the online store continue to offer Beats-branded headphones and speakers alongside Apple's AirPods and HomePod.

Apple has made similar moves in the past, eliminating stock of fitness trackers ahead of the launch Apple Watch. Apple told Bloomberg that it regularly makes changes to the products that it offers as new third-party accessories are released and the needs of customers change.

Rumors indicate Apple is working on several new audio products, including a smaller, lower-cost HomePod and high-end over-ear Apple-branded headphones that could be called "AirPods Studio," to be sold alongside the AirPods and AirPods Pro.

Both of these new products are expected to launch before the end of the year, and the removal of the third-party audio products from the online store suggests we could be seeing Apple's new audio devices soon, perhaps as soon as the iPhone-centric October event that's rumored to be in the works.

Current rumors indicate that Apple has an event planned for October 13, and if that's the case, we could see an Apple announcement as soon as tomorrow.

HomePod is a great device.

HomePod is a great device as long as you're not interacting with Siri.
Score: 34 Votes (Like | Disagree)

I've had no problems with Siri via HomePod.

Come on Apple why can't we have comparisons to other vendors products in the store?

Consumers still have choice, just not at the Apple Store. It's a store for Apple's products...why would they sell products that compete with theirs? Should they also sell Microsoft and Dell PCs? Google phones? Samsung tablets?
Score: 29 Votes (Like | Disagree)

farewelwilliams
HomePod is a great device.
Score: 29 Votes (Like | Disagree)

McKodiak
Apple is removing competing products from it's stores? Don't they have to allow competing products to have prominent floorspace, window advertising, and Apple Genius recommendations all at a 0% fee to the competitor?
Score: 26 Votes (Like | Disagree)

HomePod is a great device as long as you're not interacting with Siri.

I've had no problems with Siri via HomePod.
Score: 25 Votes (Like | Disagree)
Read All Comments

Monday January 10, 2022 10:09 am PST by Juli Clover
Apple today discontinued the Beats Pill+ Bluetooth Speaker that's been available since 2015, removing it from the online Apple Store. Searching for the speaker brings up no results on Apple's store, and as noted by 9to5Mac, it has also been removed from the Beats website. The Beats Pill+ Speaker first came out in 2015, and it was priced at $230 at launch, but Apple had been selling it for...
Read Full Article • 51 comments

Thursday October 14, 2021 2:44 pm PDT by Juli Clover
Apple has hired a new software lead for the HomePod team as part of an effort to better compete with smart home speakers from Amazon and Google, reports Bloomberg. The Syng Cell Alpha Afrooz Family, an audio engineer who worked at Apple from 2012 to 2016, has rejoined the company and is leading software development on the HomePod/Apple TV team. Family co-founded speaker company Syng alongside ...
Read Full Article • 156 comments

Thursday March 17, 2022 12:07 pm PDT by Dan Barbera
Sony in February introduced the LinkBuds, a curious set of earphones that have an open design that's not quite like any other in-ear headphone product on the market. We picked up a set of Sony's strange LinkBuds to see how they measure up to Apple's third-generation AirPods. Subscribe to the MacRumors YouTube channel for more videos. Priced at $178, the LinkBuds have a naked donut-shaped...
Read Full Article • 38 comments