Apple in iOS 14 added Picture in Picture to the iPhone, a feature designed to let you watch a video in a small screen on your device while you continue to do other things on the phone. 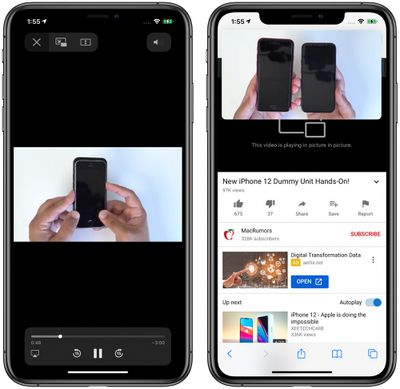 As of today, that workaround is gone, and it's not clear if it's a bug or a deliberate removal. Attempting to use Picture in Picture on a video on the mobile YouTube website simply doesn't work. Tapping the Picture in Picture button when in full screen mode pops the video out for a second, but it immediately pops back into the website, so it can't be used as a Picture in Picture window.

We tested Picture in Picture with YouTube just yesterday for a Picture in Picture tutorial video and as you can see below, it was working fine. Since then there have been no updates to iOS or Safari, so it's not clear what's going on.

Update: Picture in Picture appears to work on the mobile YouTube website in Safari for those who are YouTube Premium subscribers, which suggests that the restriction is intentional and not a bug.

Remember when they took away the ability to play audio of videos with the screen off?
Score: 71 Votes (Like | Disagree)

HeavenDynamic
These guys are fast when it comes to make you want to pay for Premium.
Score: 40 Votes (Like | Disagree)

Tymmz
Fair enough. I started paying for Premium. Got fed up with the ads and I DO watch a lot of YouTube. Worth the price.

What’s so hard about adding it on YouTube. I don’t understand.

It’s not that it’s hard, it’s that they want you to pay for a premium membership, in which they’ll bundle expected features like PiP and audio playback while the screen is off.
Score: 25 Votes (Like | Disagree)

useless.misc
Might be some magic on Google's end to reinforce that you should upgrade to YT Premium to view anything outside the app/page.
Score: 18 Votes (Like | Disagree)
Read All Comments

Monday March 22, 2021 9:04 am PDT by Joe Rossignol
In recent days, some Apple TV 4K and Apple TV HD users have been receiving a "something went wrong" error message when attempting to load videos using the YouTube app on tvOS. The issue does not appear to be widespread, and it seems to arise only when a user is signed into their YouTube account on the Apple TV. YouTube has confirmed on Twitter that it is investigating the issue and working...
Read Full Article • 46 comments

Handy iPhone and iPad Shortcuts You Should Check Out

Friday March 19, 2021 12:31 pm PDT by Juli Clover
With the launch of iOS 13, Apple introduced Shortcuts support and the Shortcuts app, adding a whole range of new functionality to the iPhone. Shortcuts have continued to be popular since their debut, and in iOS 14, the addition of Home screen widgets made it even easier to get to your Shortcuts, so we thought we'd round up some of our most useful Shortcut options for iPhone and iPad. Subscribe ...
Read Full Article • 53 comments

Wednesday February 10, 2021 3:27 am PST by Tim Hardwick
YouTube's website appears to support picture-in-picture (PiP) again in the latest iOS 14.5 beta for iPhone, although how long it will continue to work for is anybody's guess. Tests show it works in Safari as well as third-party browsers like Chrome and Firefox by expanding a video to play fullscreen, and then tapping the small picture-in-picture icon in the top-left of the interface. Then ...
Read Full Article • 61 comments

Tuesday April 20, 2021 12:46 pm PDT by Joe Rossignol
Apple today hosted its virtual "Spring Loaded" event, packing several announcements into a fast-paced, one-hour presentation, including a new iPad Pro, a redesigned iMac, a new Apple TV with a redesigned Siri Remote, the AirTag item tracker, and more. The video can be replayed in its entirety on Apple's website and on YouTube. Apple has also shared introductory videos for the new iPad Pro,...
Read Full Article • 22 comments

Google Photos Will Use Machine Learning to Animate Your Still Shots

Wednesday May 19, 2021 1:00 am PDT by Tim Hardwick
Google Photos is getting a new AI-driven feature that can take two similar pictures in your iPhone's camera roll and turn them into a single moving shot, reports The Verge. Google says the feature achieves this by using machine learning to generate additional frames between the two images, which creates the appearance of movement. If you've taken several shots in succession, for example,...
Read Full Article • 88 comments