Google in August announced the launch of a new Google Maps app that's designed for the Apple Watch, and at the time, Google said that it would be rolling out "in the coming weeks." 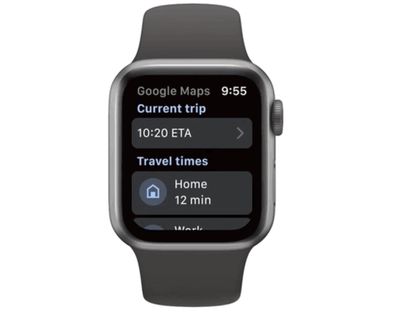 The Apple Watch app has gone live based on reports from Reddit users who downloaded the latest iPhone update and were able to install the Google Maps app on the Apple Watch.

The Google Maps app for Apple Watch mirrors the directions that have already been input on the ‌iPhone‌, and there is no option for getting directions directly on the Apple Watch. It is reliant on the iOS version of the app, but provides access to saved destinations such as work and home.

The app offers turn-by-turn directions along with ETAs so you know when you can expect to arrive to your destination. Multiple travel modes, including navigation with car, public transit, bike, or by foot are available, and there is a Google Maps complication that can be set up.

coachgq
As much trouble as Apple Maps caused in its infancy, I’m much happier using it now over google or Waze.
Score: 18 Votes (Like | Disagree)

crawfish963
Definitely not handing over all of my GPS data to Google. Same reason I don’t use Chrome, Google Photos, their search engine, or any of their other products or services.
Score: 17 Votes (Like | Disagree)

As much trouble as Apple Maps caused in its infancy, I’m much happier using it now over google or Waze.

YMMV depending on where you live. If you’re in the US Apple Maps could be better, but if you’re in Europe or Latin America you won’t be able to use half the features of apple maps because they’re US exclusive and will end up using Google Maps instead because you do get all the features there.
Score: 16 Votes (Like | Disagree)

I wish you could see your location on the map (not in navigation mode), as you can with Apple Maps on the AW. Not sure how helpful this current implementation is.

Looks like Google dodn’t learn the lesson. The lack of the ability to see onés location on the map was exactly why people never used google maps on the watch and Google ended up removing the watch app. Now they relaunch the app and make the same mistake over again.
Score: 10 Votes (Like | Disagree)

jlocker
Boy so many cool things coming out for the Apple Watch, got to upgrade my old Apple Watch 0.
Score: 8 Votes (Like | Disagree)

YMMV depending on where you live. If you’re in the US Apple Maps could be better, but if you’re in Europe or Latin America you won’t be able to use half the features of apple maps because they’re US exclusive and will end up using Google Maps instead because you do get all the features there.

Exactly, flyover, look around, subway stations exits, airport indoor maps, up to date POI's, bike directions, are all missing features here in Mexico City even as it is the largest city in the Western Hemisphere and its airport the busiest in LATAM and 30th in the World.

2020 and we still dont have Apple Pay here, Samsung Pay launched two-three years ago. Ive never used my iPhone's NFC chip. And lets not start with all the other services like say Apple News. Dont get me wrong, Apple devices are best in class and Im pretty happy in general, but, when you buy into the Apple ecosystem outside the US, you get half the advertised features, so to speak. Google's and Microsoft's presence in LATAM is substantially better.
Score: 7 Votes (Like | Disagree)
Read All Comments

Tuesday March 30, 2021 4:46 am PDT by Sami Fathi
Google today announced several new features coming to Google Maps for iOS and Android this year, including a brand new "Live View" mode that uses AR for navigation inside malls and airports. Live Mode aims to prevent customers from the "awkward moment when you're walking in the opposite direction of where you want to go" by providing directions in AR, right in the app. Google says the new...
Read Full Article • 28 comments

Sunday January 16, 2022 3:37 pm PST by Joe Rossignol
A bug in WebKit's implementation of a JavaScript API called IndexedDB can reveal your recent browsing history and even your identity, according to a blog post shared on Friday by browser fingerprinting service FingerprintJS. In a nutshell, the bug allows any website that uses IndexedDB to access the names of IndexedDB databases generated by other websites during a user's browsing session....
Read Full Article • 214 comments