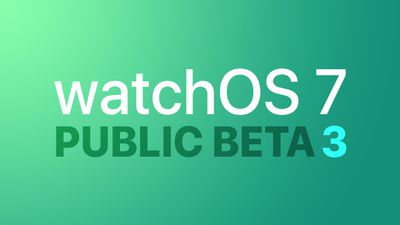 The watchOS 7 update can be downloaded after installing the proper profile from Apple's Public Beta website. watchOS 7 should not be installed on a primary device as it is still an early beta and there could be bugs, plus there is no way to downgrade back to watchOS 6.

Having never owned a Apple Watch, please forgive me if this is a dumb question.

If one uses their watch during the day, and charge at night (as is the norm from what I've read). Then how is it going to track your sleep, if its charging?

Some people charge their watch while getting ready in the morning.

I usually charge my Series 5 in the evening before going to bed. When I wake up in the morning, it’s charged around 85% and lasts through the day. When I charge it in the evening, it’s around 25-30%. While it’s charging, I put on one of my mechanical watches.

Having never owned a Apple Watch, please forgive me if this is a dumb question.

If one uses their watch during the day, and charge at night (as is the norm from what I've read). Then how is it going to track your sleep, if its charging?

I got my Watch specifically for Fall Detection, so I wear it while sleeping and in the shower. That means I had to figure out how to charge it outside of those typical times.

Turns out, it charges pretty quickly, so I charge it when I know I’m going to be sitting and reading (or watching TV) for an hour or so. Doing that at some point during the day has worked perfectly for me, and I think I’ve run out of battery maybe twice in the almost two years I’ve had the Series 4.

I’ve also had the public beta since it was released, and been fine keeping to my routine.

I have a friend who keeps her charger at her desk, and charges her series 4 when she starts checking work e-mail first thing in the morning. Connecting it to a work routine makes her less likely to forget to charge it.
Score: 5 Votes (Like | Disagree)

jumia
Available for real this time ?
Score: 4 Votes (Like | Disagree)

I haven't owned a Apple Watch before. So, please forgive me is if this is a dumb question. But if you use the watch during the day, as everyone does, and charge at night. How is it going to track your sleep, if its charging?

neoelectronaut
The handwashing timer has been really neat.
Score: 3 Votes (Like | Disagree)
Read All Comments