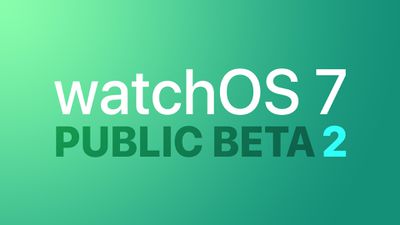 The watchOS 7 update can be downloaded after installing the proper profile from Apple's Public Beta website. watchOS 7 should not be installed on a primary device as it is still an early beta and there could be bugs, plus there is no way to downgrade back to watchOS 6.

The Apple Sleep App is very rudimentary. It doesn’t show all the stats Pillow or AutoSleep does.
Score: 2 Votes (Like | Disagree)

The iOS 14 Beta has been surprisingly really good since the first version . By far the most stable pre-release in my opinion. No issues here other than maybe some keyboard lag.
Score: 1 Votes (Like | Disagree)

iOS 14 has been incredibly stable.. do it
Score: 1 Votes (Like | Disagree)

crossifixio
Installed and ready to test! The first beta was very good. No major issues. My experience with the betas this year is overall very positive. The most stable ever!
Score: 1 Votes (Like | Disagree)

TheSkywalker77
Yay!! The fun process of removing all my apps, photos, and podcasts from my watch for an update has begun!! Love my Series 3! :P

Seriously though, hopefully this beta is as good as the first one was for me. I haven't noticed any major bugs or slow downs despite having the oldest watch supported.
Score: 1 Votes (Like | Disagree)

techno-Zen
You first!
Score: 1 Votes (Like | Disagree)
Read All Comments