Apple TV+ is set to gain three new documentaries TV shows this fall, with each one examining the world through a different perspective, Apple announced today. 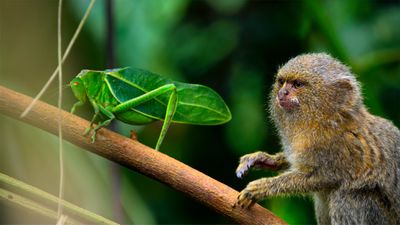 The first, "Tiny World," is set to come out on October 2, with six episodes debuting on that date. "Tiny World" will be narrated by actor Paul Rudd, and it will look at the world "through the eyes of the tiniest creatures" to examine the things they do for survival using "brand new camera technology."

Premiering on November 13, the next docuseries, "Becoming You," explores how children's first 2,000 days shape their lives. The series features more than 100 children across the world, from Nepal to Japan to Borneo, examining the ways that children learn to think, speak, and move from birth to five-years-old. Six episodes will come out on its launch date.

The final docuseries, premiering on December 4, is "Earth at Night in Color." Narrated by Tom Hiddleston, "Earth at Night in Color" follows animals at night using "next-generation cameras" to "reveal new insights and never before seen behaviors." The six episode series was filmed across six continents, ranging from the Arctic Circle to the African grasslands.

‌Apple TV+‌ is Apple's streaming television service, available for $4.99 per month. Apple is continuing to provide a free year of service to those who purchase an iPhone, iPad, Mac, or Apple TV, though the first people who signed up last year after making a purchase will soon see their free subscriptions expire.

This morning, rumors suggested Apple is planning to introduce AR bonus content for ‌Apple TV+‌, which will see aspects of scenes in a TV show, like characters or objects, and display them on the viewer's ‌iPhone‌ or ‌iPad‌ so they can be seen as if they're right in the user's surrounding area. Apple's new nature shows would perhaps make good use of such technology.

And now, Apple. Nothing wrong with that.
Score: 14 Votes (Like | Disagree)

narrated by actor Paul Rudd, and it will look at the world "through the eyes of the tiniest creatures"

They better do an episode about ants.
Score: 9 Votes (Like | Disagree)

Hate to break it to you, but Apple is partnering with BBC on some of these. Lol

Very cool!! I will watch all three of these. It seemed so much of the initial Apple TV+ output was TV-MA.

It seems as if Apple is not releasing anything new until the free trials have expired.

Ted Lasso is one of the best shows on TV+ and is coming out now. On The Rocks is coming in October. Tehran and Long Way Up are coming in September.

Apple is putting out a steady stream of new shows to entice people to stay. Why would they wait until the trials are over? There's no way they would be interested that late.

Cool. I'll give all three of these a go. As a Brit, I do need to wean myself off David Attenborough as I'm not sure how many more series he's going to be able to (or want to) narrate.

So far, with my free trial, all I've watched on Apple TV is Central Park, which I loved.

None of the other shows have interested me at all. People seem to rave about For All Mankind but it seems neither documentary nor drama, so I've avoided it.

If you're british, check out Trying and Ted Lasso. There's a lot of in-jokes you will get that most American don't. And both shows are excellent.
Score: 4 Votes (Like | Disagree)

44267547
So ‘Tiny world’ narrated by Paul Rudd would be what ‘Planet earth’ is for BBC narrated by David Attenborough. Should be good,
I’ll watch.
Score: 4 Votes (Like | Disagree)
Read All Comments

Monday December 5, 2022 12:38 am PST by Tim Hardwick
UK-based tech company Nothing plans to launch a smartphone in the US to directly compete with Apple's iPhone, according to a new report out today. In an interview with CNBC, Nothing CEO Carl Pei said the startup is in "early conversations" with American cellular carriers about launching a new phone in the US, but he stopped short of naming any of the carriers or the phone model. Nothing...
Read Full Article • 151 comments