Apple's default Siri Remote for the Apple TV has never been particularly popular with users due to its small size and fiddly controls, which has prompted third-party companies to make alternative options.

Subscribe to the MacRumors YouTube channel for more videos.
Last year we took a look at the Salt Remote, and now Function101 has come out with an alternate ‌Apple TV‌ remote that we thought we'd check out to see if it's better than what Apple offers.

The Button Remote from Function101 is priced at $30, which isn't too bad if you have a broken ‌Siri‌ Remote or are just fed up with using it (note that ‌Siri‌ Remote is used in countries where ‌Siri‌ is available on ‌Apple TV‌ - in others, it's the same design, but without a ‌Siri‌ button and it's called the ‌Apple TV‌ remote). 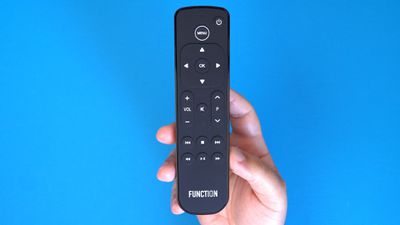 Function101's remote is a lot easier to find than the Salt Remote, which was only sold in Switzerland. The Button Remote is available in the U.S. and can be purchased online.

Design wise, the Button Remote is bigger, thicker, and provides more physical buttons than the ‌Siri‌ Remote, which is largely touch based. The larger design means it's less likely to slip in between couch cushions or otherwise disappear.

It can be difficult to navigate with the touchpad on the ‌Siri‌ Remote, a problem that's solved with the Button Remote because it uses directional buttons for navigation instead of Apple's swipes.

The physical buttons work well enough. There are directional arrows for navigating, an OK button for selecting items, a menu button for going back to the previous screen (hold it down to go to the Home Screen), volume buttons, and media playback controls.

Skipping forwards or backwards 10 seconds with the Button Remote is a major improvement over the ‌Siri‌ Remote that requires pressing at the edge of the touchpad. The Button Remote has specific buttons for fast-forwarding or rewinding content, which is a plus.

Of course, there's one major button missing that may be a dealbreaker based on how you use your ‌Apple TV‌ - there's no ‌Siri‌ button. If you regularly ask ‌Siri‌ to find content on the ‌Apple TV‌ or otherwise take advantage of the personal assistant, you will have no way to do that on the Button Remote.

You could use the ‌Siri‌ Remote alongside the Button Remote, or use the Remote app on an iPhone when you need to access ‌Siri‌, but it will be more of a hassle than just having a ‌Siri‌ button readily available. For those who don't use ‌Siri‌, or in countries where ‌Siri‌ is not available, the lack of a ‌Siri‌ button won't matter.

The Button Remote operates on two AAA batteries like many other remotes on the market, and it does not need to be charged like the ‌Siri‌ Remote.

Though it doesn't replicate everything the ‌Siri‌ Remote can do, the Button Remote is worth checking out for those who are looking for an alternative. Let us know what you think of the remote in the comments.

FaustsHausUK
This remote, but with Bluetooth connectivity, would be a no-brainer for me. Here’s hoping there’s a second generation.
Score: 11 Votes (Like | Disagree)

TVreporter
Darn... for a fluttering second I thought it was a post of the new Apple TV.

This long wait has been painful.
Score: 11 Votes (Like | Disagree)

kuwxman
The free Apple Remote app is a serious replacement contender too, for those that haven't downloaded the app. I honestly use it more than the Siri Remote. It has cons too like not being able to change the volume, but being able to copy/paste long passwords in or using the app with multiple AppleTVs are big pros IMO. Otherwise, it can do the same thing the physical remote can.
Score: 10 Votes (Like | Disagree)

The Button Remote from Function101 is priced at $30, which isn't too bad if you have a broken Siri Remote or are just fed up with using it (note that Siri Remote is used in countries where Siri is available on Apple TV - in others, it's the same design, but without a Siri button and it's called the Apple TV remote).

While $30 isn't much, the Apple TV's Remote Learning Feature has been around since the first gen ATV, and can learn the button presses of any IR remote, such as TV remotes, receiver remotes, DVD player remotes, it even works with an iRobot Roomba remote.

It can learn all the buttons in just a few seconds, and best of all, it is free.

You can use your TV's remote and just have one remote for both TV and ATV.
Score: 8 Votes (Like | Disagree)

DTphonehome
Apple had better redesign the remote on the next gen. Worst Apple design since the hockey puck mouse.
Score: 8 Votes (Like | Disagree)
Read All Comments