Enterprising eBay sellers are hoping people who are desperate to play Fortnite will pay high prices for iPhones with the game installed, and there are currently hundreds of iPhone listings on eBay advertising the Fortnite app as a purchase perk. 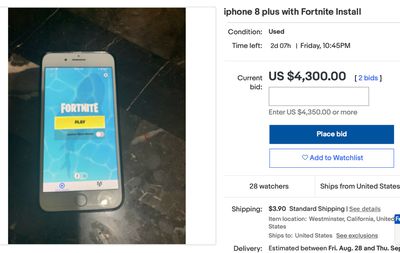 Many of the prices listed are astronomical, ranging from over $1,000 to up to $10,000 (as noted by Business Insider), but there are some devices available that are reasonably priced. Unsurprisingly, few of the iPhones priced at thousands of dollars have bids, as most people don't appear that desperate to play Fortnite on a mobile device at this time.

There's one ‌iPhone‌ 8 with Fortnite installed that has two bids over $4,000, but those are most likely fake bids. An iPhone SE 2020 with Fortnite is currently priced at $345, which is reasonable, and there's an ‌iPhone‌ XS with Fortnite that's going for $233 at the current time. Given the myriad other ways to play Fortnite, most of these eBay sellers likely won't see purchases.

‌Epic Games‌ filed a pre-planned lawsuit after the app was pulled, and the conflict escalated from there. On Monday, Apple sent Epic a letter threatening to terminate all of its developer accounts by August 28, prompting another lawsuit from Epic to attempt to stop that from happening.

Apple has said that it plans to revoke ‌Epic Games‌' access to the App Store and all app development tools, including those used for the Unreal Engine that ‌Epic Games‌ makes available to third-party developers. In response to Epic's second lawsuit, Apple said that it has no plans to "make an exception" for ‌Epic Games‌.

Apple has also made it clear that Fortnite can be returned to the ‌App Store‌ as soon as ‌Epic Games‌ agrees to follow Apple's ‌App Store‌ rules and policies, but it's not known if and when Epic might cave. Right now, Fortnite continues to offer the direct payment purchase option for in-game currency that violates Apple's rules. Regardless of whether Epic makes an effort to get Fortnite back into the ‌App Store‌, the legal battle that has kicked off could span years.

Epic is hoping to recruit a "coalition of Apple critics" to stand with it to fight Apple's ‌App Store‌ policies, which are already under scrutiny as part of an antitrust investigation in the United States.

While the fight between Apple and Epic rages on, Fortnite continues to be playable on any ‌iPhone‌ or iPad that had the game installed before the app was pulled from the ‌App Store‌, hence all the eBay listings. It is also still available on Android devices (though it was pulled from the Google Play store), Macs, PCs, and consoles from Nintendo, Sony, and Microsoft.

omenatarhuri
Probably not going to work very long if at all, most of these games need to be latest version to be able to connect online.
Score: 24 Votes (Like | Disagree)

Graphikos
Doesn't even have free shipping? No deal.
Score: 20 Votes (Like | Disagree)

TheYayAreaLiving ?
It's probably Fortnite's iPhone's that are being put on sale, just milking the cow.

SMH Fortnite... Give it up! your not going to win. Fortnite is just being petty and greedy at this point.
Score: 19 Votes (Like | Disagree)
Read All Comments