Instagram has today officially launched "Reels," a new short-form video service set to rival TikTok, in over 50 countries, including the U.S., India, France, Germany, Japan, Australia, and the U.K. Reels is part of the Instagram camera of the existing Instagram app. 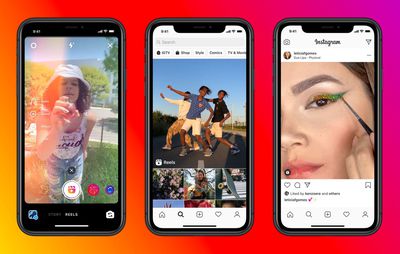 Instagram says that Reels are "a new way to create and discover short, entertaining videos." The service features the ability to record and edit 15-second multi-clip videos with music from the Instagram library, AR effects, and various new creative editing tools. Reels can be shared with followers on "Feed", or for public accounts, made available to all users worldwide via a new space in "Explore." Reels' most significant difference from TikTok is supposedly its tie-ins to the overarching Instagram ecosystem.

Last month, it was reported that Instagram was offering significant cash incentives to TikTok creators to persuade them to move to Reels. Incentive payments for some were claimed to be in the "hundreds of thousands of dollars," with the highest payouts for creators who commit to posting their videos exclusively to Reels. The move was a clear indication that Instagram views Reels as a direct competitor to TikTok. In April, YouTube announced "Shorts," a new service that will also replicate the short video format to compete with TikTok.

"I think TikTok deserves a ton of credit for popularizing formats in this space, and it's just great work,” Instagram's product director, Robby Stein, told The Verge. "But at the end of the day, no two products are exactly alike, and ours are not either."

The company's line on similarity with TikTok is similar to the approach taken with "Stories," launched in 2016 as a competitor to Snapchat. Instagram Stories soon had more active daily users than Snapchat itself.

The launch of Reels comes as TikTok, owned by Chinese company ByteDance, faces immense scrutiny in the United States, and Microsoft negotiates a purchase of the service.

iReality85
TikTok and Reels confirm to me that Vine was:

A) Ahead of its time
B) Too restrictive to creating engaging content
C) Grossly mismanaged by Twitter
D) All of the above
Score: 11 Votes (Like | Disagree)

iLoveDeveloping
Can someone just please take Facebook to court already and stop this copy cat bull!! Can’t wait for that cancerous company to die.
Score: 10 Votes (Like | Disagree)

barkomatic
How lucky for Facebook that the White House attacks their only true competitor just as they launch a copycat product.
Score: 6 Votes (Like | Disagree)