Internal Apple emails, made public by the House Judiciary Committee's antitrust inquiry, have revealed information about why Apple blocked in-app purchases of Kindle books on iOS devices, reports The Verge. 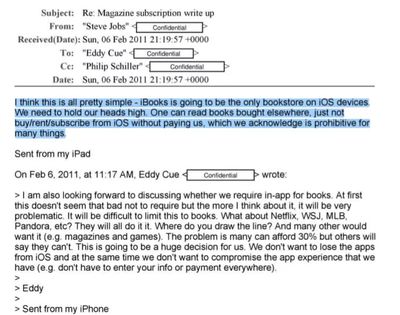 Two sets of emails between Steve Jobs, Phil Schiller, Eddy Cue, and various other senior Apple executives, disclose the exact thinking behind how Apple approached Kindle on iOS. The current precedent was outlined by Steve Jobs, who stated that "I think this is all pretty simple — iBooks is going to be the only bookstore on iOS devices. We need to hold our heads high. One can read books bought elsewhere, just not buy/rent/subscribe from iOS without paying us, which we acknowledge is prohibitive for many things."

Originally, Kindle books were available for purchase via the iOS app. Since 2011, the Kindle iOS app has only allowed users to read books in the app. Purchase of new titles can only be made in Safari, not in the app itself. This allows Amazon to avoid a 30% Apple surcharge on in-app purchases.

‌Phil Schiller‌ expressed concern in one of the emails that Amazon was advertising the fact that users could still access Kindle books purchased on iOS on Android devices, suggesting it was convenient to switch from iOS to Android.

Schiller explained that Apple initially made an exception for Amazon, because "users would be buying books on a Kindle device and later accessing them on iPhone." Over time, as sales of iOS devices rose dramatically, Schiller believed that it was time to reconsider the exception. Amazon's TV advertising was a clear point of contention for Apple and prompted the change of attitude.

These discussions took place as Apple was planning to announce revised App Store policies for subscriptions. Jobs suggested in his response that Amazon "must use our payment system for everything," and justify this with the new subscription policies. "If they want to compare us to Android, let's force them to use our far superior payment system," Jobs wrote.

Amazon later removed a link to the Kindle Store in the iOS app to comply with the new App Store subscription rules. From then onwards, the Kindle app's storefront feature was removed entirely, with no overt direction as to where to buy books.

The news that Apple made exceptions for Amazon for Kindle prior to 2011 and for Prime Video has caused confusion among some observers, as Apple has consistently claimed it treats every developer the same. ‌Phil Schiller‌ stated ahead of the antitrust inquiry this week that all apps in the ‌App Store‌ have been treated "the same - one set of rules for everybody, no special deals, no special terms, no special code, everything applies to all developers the same."

BGPL
Apple - sticking it to their customers since 1977. And then blatantly lying about it. Repeatedly.
Score: 36 Votes (Like | Disagree)

LeeW
As with every company, there is the Public face and the Private face. None of this is really any surprise to anyone, is it?
Score: 35 Votes (Like | Disagree)

This is very tame compared to what really goes on in business every day.
Score: 34 Votes (Like | Disagree)

FSMBP
My favorite is Phil's "Not fun to watch" in regards to switching devices. It's like if you're making a superior device (which I believe they do), why would this bruise your ego?

It's like they are focused on making it hard for people to leave the ecosystem on purpose.

Just make awesome products, and people will flock to your product.
Score: 22 Votes (Like | Disagree)

carlsson
I would like to see how all the nay-sayers at the forums the last days would run a business...

It's very easy to have opinions, it's another to build a company.
Score: 18 Votes (Like | Disagree)
Read All Comments