Apple Accessibility Exec: 'iPhone has Become the Most Powerful and Popular Assistive Device Ever'

This week marks the 30th anniversary of the Americans with Disabilities Act of 1990, and to highlight the milestone, TechCrunch did interviews with several tech companies and advocacy organizations, including Apple, to discuss how technology has improved the everyday lives of people with disabilities. 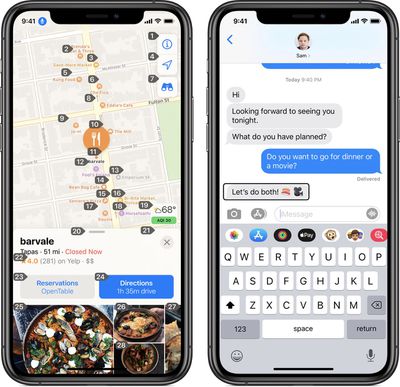 At Apple, TechCrunch spoke to Sarah Herrlinger, the company's Director of Global Accessibility Policy. According to Herrlinger, Apple has "always believed accessibility is a human right," which is a value that Apple keeps in mind with each new product that's released.

Apple has always been dedicated to making its products accessible for everyone, and implements new accessibility features with each and every new software release. According to Herrlinger, Apple's iPhone has become the most powerful assistive device ever.

"The historical impact of iPhone as a mainstream consumer product is well documented. What is less understood though is how life changing iPhone and our other products have been for disability communities," said Herrlinger. "Over time iPhone has become the most powerful and popular assistive device ever. It broke the mold of previous thinking because it showed accessibility could in fact be seamlessly built into a device that all people can use universally."

One of the most important features that the ‌iPhone‌ has to offer, as TechCrunch points out, is VoiceOver. VoiceOver is an accessibility feature that reads the contents of the ‌iPhone‌'s screen to allow those with visual impairments to navigate through iOS. Over the weekend, Kristy Viers demonstrated how she uses her ‌iPhone‌, and it's a great look at how VoiceOver and other accessibility features work.

I thought I would share how I, as someone who is visually impaired use my iPhone.☺️ pic.twitter.com/wPI9smOIq0 — Kristy Viers (@Kristy_Viers) July 26, 2020

Herrlinger said that there's opportunity for growth in the tech industry when it comes to accessibility, and that "representation and inclusion are critical."

We believe in the mantra of many within disability communities: 'Nothing about us without us.' We started a dedicated accessibility team in 1985, but like all things on inclusion -- accessibility should be everyone's job at Apple.

Apple in iOS 14 is introducing multiple new accessibility features like Back Tap for tapping on the rear of the ‌iPhone‌ to perform actions, Headphones Accommodations for amplifying soft sounds and adjusting frequencies to make music, movies, calls, and more sound clearer, and Sound Recognition, a feature able to listen for certain sounds like alarms and send alerts.

There are also iOS 14 improvements for VoiceOver that use on-device intelligence to recognize elements on the screen and to offer support for app and web experiences that don't have built-in accessibility support.

TechCrunch's full ADA article also includes comments from Microsoft, Facebook, and others, and can be read over on the TechCrunch website.

arn
The Braille keyboard in the video is awesome. Didn’t know it existed.
Score: 14 Votes (Like | Disagree)

Apple_Robert
I am proud of Apple for the work they have been doing in this area over the last several years. I hope they continue their focus and help make the iPhone a tool that becomes an extension of a disabled person’s body even more so than today.
Score: 11 Votes (Like | Disagree)

DogHouseDub
I hereby withdraw all criticism regarding the resources Apple is putting into OS development. THIS is a fantastic use of your resources for the betterment of humankind.

m4mario
As a developer, I know how much push Apple gives for Accessibility. During a previous WWDC I attended, there was an evening event where physically challenged Apple employees were available for developers to interact with. As you might imagine, Apple employs people with various disabilities as test group for its accessibility features. We could take our apps and get these people to use it and get feedback from them. These are facilities a typical developer cannot afford. And also, just that interaction motivates developers to improve support for accessibility.
Score: 8 Votes (Like | Disagree)

MacKay Olson
I have to say, as a hearing-impaired person, apple’s dedication to helping people like me is absolutely amazing. Years ago, Apple was the only company that made it possible to Bluetooth your hearing aids directly to the phone (not using a separate gadget as a go between). It’s seamless and amazing. It makes being hearing impaired an advantage rather than a drawback as it is at all other times. Android just got that feature this year and it only works on 3 different phones and two (rather inferior) types of hearing aids.
Score: 7 Votes (Like | Disagree)

Most powerful? That may very well be true, in a narrow sense. But saying "most popular" is a bit hyperbolic. There are low-tech devices which likely own that title.

I don’t think you quite understand the amount of thought and design work Apple has put into accessibility on both iOS and macOS. Just because other devices are great at accessibility doesn’t mean apple deserves the recognition for accessibility. This is coming from a designer.

I’m the first in line to critique Apple on a lot of what they do.But this is just something you can’t take away from them.
Score: 5 Votes (Like | Disagree)
Read All Comments