Game Center, a feature for tracking game progress and connecting gamers together for multiplayer gameplay experiences, has long been a part of iOS. 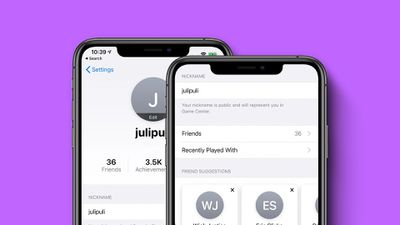 Game Center achievements in Settings
The feature was added to iOS 4 in 2010 and was a key part of gaming for a few years, but Apple nixed the Game Center app in 2016 with the release of iOS 10. Game Center has stuck around since then, but as more of a behind the scenes feature.

Splash page when starting an Apple Arcade game after downloading iOS 14
Users are able to view their achievements, leaderboards, and Game Center profiles directly within various games through a new in-game dashboard in ‌Apple Arcade‌ games and through the updated Game Center section in the Settings app.

Game Center in an ‌Apple Arcade‌ game
Apple is encouraging developers to set up leaderboards, add achievements, and opt in to the Game Center challenges feature for their apps.

‌Apple Arcade‌ game in App Store listing available Game Center achievements
‌Apple Arcade‌ is getting other feature updates, such as lists of achievements you can earn in games right on the game page, filters for finding new content, sneak peeks at upcoming games, and a continue playing feature that lets you launch the games you've recently played across your devices from the ‌Apple Arcade‌ tab.
Tags: Game Center, Apple Arcade Guide
[ 28 comments ]

GubbyMan
GameCenter needs to get more features so it can compete with real platforms like Steam, PSN or XBL.

For example, let people request to start an iMessage conversation with others on GameCenter. Or make it easy to integrate voice chat into games. Just seeing names online without being able to chat is so boring, might as well play against AI in so many of these Apple Arcade games.
Score: 8 Votes (Like | Disagree)

newyorksole
The Game Center icon/logo just makes no sense to me Lol. Colorful circles instead of a game controller or something. Looks better though.
Score: 6 Votes (Like | Disagree)

Improvements are always great. But did anybody ask for this?

Me! I've wanted Game Center back for a while, and it makes even more sense now with Apple Arcade. Glad to see they're giving this some attention.
Score: 5 Votes (Like | Disagree)

jimbobb24
Why should developers trust Apple with this, again?
Score: 3 Votes (Like | Disagree)

Bustycat
Game Center is just a scoreboard to me.
Score: 3 Votes (Like | Disagree)

drcre8tive
can't wait for that Game Center widget to come out
Score: 2 Votes (Like | Disagree)
Read All Comments