Sidecar: Turn an iPad Into a Secondary Mac Display

This guide covers everything you need to know about Sidecar, from how to use it to compatibility to Apple Pencil integration.

How to Use Sidecar

Using Sidecar requires a compatible Mac running macOS Catalina or later and a compatible ‌iPad‌ running iOS 13 or later. There are multiple ways to activate Sidecar, all of which can be done from Catalina.

The easiest way to get to Sidecar is to use the AirPlay interface on the Mac. When you click the ‌AirPlay‌ icon at the top of the Menu bar (it's the one that looks like a screen with an arrow), if you have an ‌iPad‌ that's compatible with Sidecar, it will show up in the ‌AirPlay‌ list. 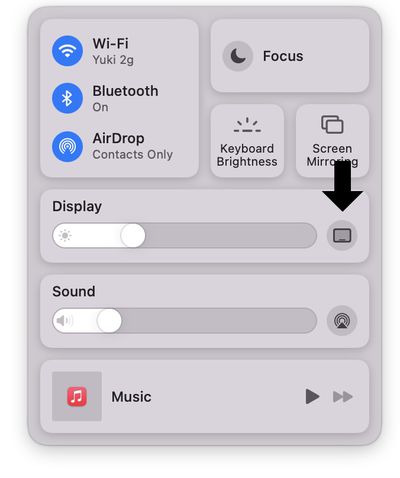 From there, simply choose the ‌iPad‌ that you want to connect to and it will automatically turn on and be activated as a secondary Mac display.

You can also get to Sidecar by clicking and holding the green window expansion button on any Mac app, and you can access Sidecar in the Sidecar section of System Preferences.

Sidecar is designed as a secondary Mac display, so it works like any other secondary display you might use with your Mac. You can drag windows from the Mac to the ‌iPad‌ and vice versa, and interact with both using your Mac's trackpad.

Sidecar is not designed to work with touch gestures, so while you can tap some on-screen control options or scroll through some webpages, you're mostly meant to control things with either the trackpad or mouse of your Mac or with the ‌Apple Pencil‌. That's because Sidecar is not meant to bring touch controls to Mac - it's just a secondary display option.

In apps like Photoshop and Illustrator, the ‌Apple Pencil‌ does even more. You can draw right in Photoshop or other similar Mac apps, which transforms the ‌iPad‌ into a graphics tablet for your Mac, not unlike a Wacom graphics tablet. It's a great way to create art, edit photos, and more with the interactivity of your ‌Apple Pencil‌ but the power of your Mac.

When using a keyboard like Apple's Smart Keyboard with an ‌iPad‌, the keyboard serves as an alternative to the Mac keyboard, letting you type like you would on the Mac in any open window.

Your Mac can be connected to your ‌iPad‌ over a wired or wireless connection. For a wired connection, you'll need an appropriate cable, such as a USB-C to USB-C cable for the newest ‌iPad‌ Pros or a USB-C to Lightning cable for Lightning-equipped ‌iPad‌ models.

Using a wireless connection requires your ‌iPad‌ to be within 10 meters of your Mac, which is actually pretty far.

Sidecar puts a control sidebar on your ‌iPad‌ for doing things like hiding or showing the dock, bringing up the on-screen keyboard, closing a window, or accessing controls like Shift, Command, Option, and Control.

Sidecar also adds a Touch Bar to the bottom of the ‌iPad‌, which is the same as the Touch Bar on the Touch Bar-compatible MacBook Pro models. Even if your Mac doesn't naturally have a Touch Bar, these Touch Bar controls will show up.

Touch Bar controls will pop up for Apple apps and for third-party apps that have implemented support for the Touch Bar.

If you click on the ‌AirPlay‌ icon while your Mac is connected to your ‌iPad‌, you can see some quick controls for doing things like hiding the sidebar or hiding the Touch Bar, and there's also an option to swap between using the ‌iPad‌ as a separate display or mirroring the Mac's current display.

Additional Sidecar options can be found by opening up System Preferences and choosing the Sidecar section. In this spot, you can move the sidebar to the left or the right of the screen, move the Touch Bar to the bottom or the top of the screen, or enable double tap on ‌Apple Pencil‌.

Sidecar is limited to many newer Macs, and it is compatible with the following machines:

Most older machines are blacklisted from taking advantage of Sidecar, but some older Macs can use the feature via a Terminal command provided by developer Steve Troughton-Smith. There are few details on this method, but those interested can check out our original article on compatibility.

Have questions about Sidecar, know of a feature we left out, or want to offer feedback on this guide? Send us an email here.

Wednesday June 12, 2019 2:29 pm PDT by Juli Clover
With the launch of iOS 13, Apple decided to split iOS 13 for the iPad into its own dedicated operating system called iPadOS. Going forward, iPadOS will be the version of iOS that runs on Apple's iPad devices. iPadOS includes all of the features of iOS 13, plus some additional tweaks and changes made specifically for a device with a larger display. In our latest video, we went hands-on with...
Read Full Article • 139 comments

Thursday June 6, 2019 1:29 pm PDT by Juli Clover
macOS Catalina introduces Sidecar, a native feature that turns the iPad into a secondary display for the Mac. It's a useful function that works well, but it's also something that third-party companies have been doing for several years now. One of those companies makes the Luna Display, a hardware-based dongle that plugs into the Mac to turn the iPad into a secondary display. According to Luna...
Read Full Article • 99 comments

Thursday June 6, 2019 9:46 am PDT by Juli Clover
Apple in macOS Catalina introduced a new feature called Sidecar, which is designed to turn an iPad into a second display for a Mac, either extending what's on the screen or mirroring the content. Apple hasn't yet provided details on which devices will work with Sidecar, but developer Steve Troughton-Smith was able to find some details by digging into macOS Catalina's code. As it turns...
Read Full Article • 142 comments

Wednesday June 5, 2019 4:39 pm PDT by Juli Clover
Apple this week unveiled macOS Catalina, the newest version of the macOS software designed to run on Macs. macOS Catalina is launching this fall, but it is available now in a beta capacity for developers. In our latest video, we went hands-on with macOS Catalina to explore all of the new features that are coming to the Mac later this year. Subscribe to the MacRumors YouTube channel for more ...
Read Full Article • 124 comments

Wednesday June 5, 2019 4:23 pm PDT by Tim Hardwick
In macOS Catalina, it seems whether or not you own a MacBook with a Touch Bar, Apple still wants you to be able to access those virtual controls, even if that means putting them right on the screen. Image credit: Reddit user dotmax Apple's new Sidecar app lets you connect an iPad to your Mac for extra screen space. It works both wired and wirelessly, and supports the Apple Pencil as an input...
Read Full Article • 80 comments

Monday June 3, 2019 11:59 am PDT by Joe Rossignol
Apple today at WWDC 2019 unveiled a new Mac app named Sidecar that will allow an iPad to be used as a second display for a Mac, similar to existing third-party options like Duet Display and Luna Display. Sidecar will work both wired and wirelessly and will support the Apple Pencil as an input device for the Mac. This functionality will be supported across all apps that support tablets....
Read Full Article • 46 comments