In this week's App Recap, we've highlighted three apps that are worth checking out. We've also compiled a list of apps that received major updates this week. 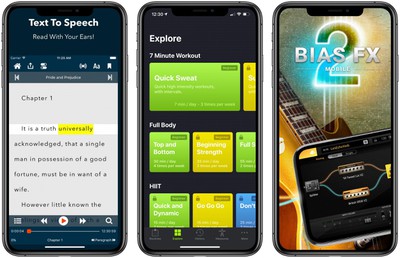 Saturday July 4, 2020 9:44 pm PDT by MacRumors Staff
iPhone 12 dummy models based on leaked schematics have been starting to circulate online and in online marketplaces. Not happy with the circulating size comparisons between the rumored 5.4" iPhone 12 and the original iPhone SE models, MacRumors forum user iZac took matters into his own hands and purchased his own 5.4" dummy model to provide more detailed size comparisons between the original...
Read Full Article • 180 comments

Monday July 6, 2020 7:53 am PDT by Mitchel Broussard
Tom Hanks' WWII drama "Greyhound" is set to premiere on Apple TV+ this Friday, July 10, and ahead of that debut the actor gave an interview with The Guardian discussing the film. "Greyhound" was originally planned to see a theatrical release this summer, and was repeatedly delayed in the wake of the ongoing Covid-19 pandemic. Apple won the streaming rights to the film, and in the new...
Read Full Article • 194 comments

Monday July 6, 2020 6:55 am PDT by Eric Slivka
Amid rumors and hints of a forthcoming update for the iMac, supplies of Apple's current 27-inch iMac continue to dwindle with mid- and high-end stock configurations now seeing shipping estimates pushed back into September. The 27-inch iMac has seen tight supplies and extended shipping estimates for months now, but the situation has been gradually worsening to the point where new buyers can...
Read Full Article • 85 comments

Monday July 6, 2020 2:04 pm PDT by Juli Clover
Ahead of the launch of new iPhones we often see dummy models created based on leaked schematics and specifications, with those models designed to let case makers create cases for the new devices ahead of their release. We got our hands on a set of dummy models that represent the iPhone 12 lineup, giving us our first close look at the iPhone 4-style design and the different size options. Subscri ...
Read Full Article • 104 comments

Friday July 3, 2020 1:08 pm PDT by Juli Clover
iOS 14 introduces a feature that alerts users when apps access their clipboards, and tons of apps have been caught clipboard snooping. LinkedIn is one of the iOS apps that has been reading user clipboards, and iPhone owners have complained that the app copies the contents of the clipboard with every keystroke. LinkedIn is copying the contents of my clipboard every keystroke. IOS 14 allows ...
Read Full Article • 140 comments