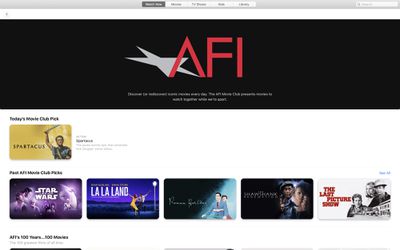 As noted by Variety, the AFI's picks in the ‌Apple TV‌ app can be found in the "Browse by Collection" section, and the movie selections are updated on a daily basis. The AFI Film Club is not a subscription service and is instead just recommending content that can be purchased through iTunes or that is available through a streaming service like HBO, Hulu, or Disney+.

Today, for example, the AFI Film Club's recommendation is "Spartacus," which can be rented for $3.99 from iTunes or purchased for $14.99. Past movie picks include "Star Wars: A New Hope," "La La Land," "Roman Holiday," "Shawshank Redemption," "Moonlight," "The Sound of Music," and more.

Along with daily movie picks the AFI Film Club has a section that includes the AFI's top 100 greatest films of all time, recommending titles like "Gone with the Wind," "The Wizard of Oz," "Toy Story," "Pulp Fiction," "The Sixth Sense," and others.

Mdracer
This, is not my AFI.
Score: 2 Votes (Like | Disagree)
Read All Comments