In this week's App Recap, we've highlighted two new apps that are worth checking out. We've also compiled a list of apps that received major updates this week. 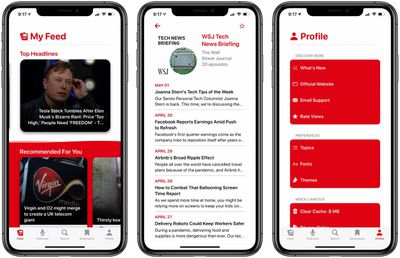 Why is everything going subscription?

Because the vendors love it. Nothing better than a steady income stream. The trouble is, they don't deserve a steady income stream in many cases. The should fix their damned bugs free of charge. If they create something new, an updated version, great, I'll think about whether or not it's worth buying.

I am irked by the bothersome adverts for Apple Arcade, which is subscription only. I'm not even going to try the free trial period because subscriptions annoy me so much. If I like a game I will pay for it. If I *really* like a game, it's not something that could be played in a few days in an 'arcade'. My life is too short to play games all day.

I did take the free year of Apple TV+ courtesy of a newly purchased device, but there's no way I will renew it in a year's time.

I don't subscribe to Apple Music. I've bought plenty of my favourite albums on iTunes. I'll keep it that way.

I don't subscribe to a 'phone plan' that includes a phone. I buy the phone outright and get a SIM separately.

When I look at my bank statement each month, I don't see any annoying subscription charges. That's the way I want to keep things.
Score: 13 Votes (Like | Disagree)

It's easier for devs to work out our user base and develop new features quicker. Instead of a new feature being bundled up with a dozen more and sold as an upgrade, we can now release things as and when they are ready. New OS releases are now continuously catered for, you don't have to buy a new version just because some API we relied on is missing on your version.

Subscription does not guarantee anything that’s the problem. There are already apps that went belly up. **** value is **** value however you spin it.
Score: 8 Votes (Like | Disagree)

AndrewHolowaty
CleanMyMac? Seriously MacRumours? How much did they pay you to promote their ********?
Score: 5 Votes (Like | Disagree)

Why is everything going subscription?

Because at first, it's less painful. Later on you either get used to it and never think about it again or you find you've slowly died the death of a thousand cuts.
It's probably easier for the dev to guarantee an income.
Score: 4 Votes (Like | Disagree)

ganja24
Bought some pro apps later devs changes to subscription by releasing new app removes pro app I bought from AppStore. I don’t by apps anymore. Devs need to get a real job stop gaming people with subscription. Not all devs are same just some greedy.
Score: 3 Votes (Like | Disagree)

varsity
Correct me if I’m wrong but wasn’t CleanMyMacX considered Malware/Grayware for a long time? Why are we promoting it’s use? They’re a highly abusive company when it comes to sharing data and charging customers for “essential software repairs” that they had to remove just to be on the App Store. Macrumors promoting Malware. How the mighty have fallen.
Score: 2 Votes (Like | Disagree)
Read All Comments