Apple last week launched its new 2020 iPhone SE, a low-cost $399 smartphone that features iPhone 8 components upgraded with the same A13 chip available in Apple's flagship iPhones. We did a full hands-on video back on Friday, but we took the weekend to see how the ‌iPhone SE‌'s camera measures up to the ‌iPhone‌ 8 and ‌iPhone‌ 11 Pro.

Subscribe to the MacRumors YouTube channel for more videos.
Based on an iFixit teardown that looked at the base camera hardware, the ‌iPhone SE‌ is using the same camera sensor as the ‌iPhone‌ 8, a 12-megapixel lens that features an f/1.8 aperture and a 28mm focal length, narrower than the 26mm focal length of the 12-megapixel wide-angle in Apple's flagships. 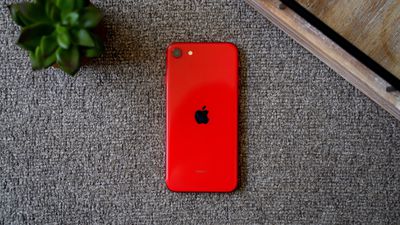 When it comes to photos with good lighting (aka, bright lighting indoors or out), all three iPhones put out similar, decent images because there's not a lot of work needed behind the scenes for improvement. The ‌iPhone‌ 8 and the ‌iPhone SE‌ photos are a little bit warmer than the cooler ‌iPhone‌ 11 Pro images, and you can see that what's coming out of the ‌iPhone‌ 11 Pro is a bit crisper, which is no surprise.

The ‌iPhone‌ 8 struggles with highlights being blown out or overexposed in some situations, and that's where you can see the Smart HDR in the ‌iPhone SE‌ shine. While the ‌iPhone SE‌ was fine in bright lighting, it definitely struggled in low lighting conditions compared to the ‌iPhone‌ 11 Pro.

Portrait Mode in the ‌iPhone SE‌ is limited to people because the neural network that powers the feature needs to detect a person to blur out the rest of the image. It's not going to work with pets, food, or other objects like it does on the ‌iPhone‌ 11 Pro.

Because the ‌iPhone SE‌'s Portrait Mode is using 2D images to create a depth map, there's a unique ‌iPhone SE‌ feature - you can take a Portrait Mode photo of a photograph that already exists. It doesn't work great all the time, but it's an interesting way to jazz up some older photographs and add background blurring.

For videos with the front-facing camera, both the ‌iPhone‌ 8 and the ‌iPhone SE‌ had a hard time with bright lights, overexposing the video the entire time. The ‌iPhone‌ 11 Pro did a much better job.

It's worth noting that the ‌iPhone SE‌ also supports QuickTake for both the front and rear-facing cameras. QuickTake lets you hold down the camera button when in picture taking mode to quickly capture a video without the need to swap over to video mode.

All in all, the ‌iPhone SE‌'s camera does produce pictures fairly similar to the pictures produced by the ‌iPhone‌ 8, but the A13 chip is doing a lot in the background to make those photographs look better. The ‌iPhone SE‌ also isn't too far off from the ‌iPhone‌ 11 and ‌iPhone‌ 11 Pro when it comes to images taken in bright lighting, but that's where the similarities end.

It's a single-lens camera rather than a dual or triple-lens camera so it doesn't have the versatility enabled by additional lenses, there's no optical zoom, software-based Portrait Mode is not as good as hardware-based portrait mode, and there is no ‌Night Mode‌ to use for low light images.

The ‌iPhone SE‌ is a passable camera of course that's going to take great every day shots, but those seriously interested in better ‌iPhone‌ photography should take a look at the ‌iPhone‌ 11 over the ‌iPhone SE‌.

Image from MacRumors reader oVerboost
If you want to see more great photos taken with the ‌iPhone SE‌ to see just what it's capable of, make sure to check out the MacRumors forums where new ‌iPhone SE‌ owners are sharing their pictures.
Related Roundup: iPhone SE
Buyer's Guide: iPhone SE (Buy Now)
Related Forum: iPhone
[ 81 comments ]

If you have Amazon Delivery Now available, search for Dramamine or an equivalent. It appears the elite bias bug is making you sick to your stomach.
Score: 27 Votes (Like | Disagree)

larrylaffer
The watermelon looks tasty in all three photos
Score: 22 Votes (Like | Disagree)

Maybe that was from the Clorox Edibles?
Score: 16 Votes (Like | Disagree)

Edsel
All three iPhone cameras are excellent for what they are used for. I’ve been scanning family photos from the 1950’s and 1960’s and those Kodak Instamatics and Disc film cameras were AWFUL in comparison. Be very grateful and happy for what Apple gave you!
Score: 14 Votes (Like | Disagree)
Read All Comments