A seemingly unreleased version of Logic Pro X has appeared on Apple's education site, as spotted by a Reddit user. 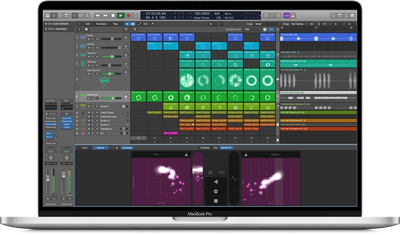 At present, the only way to use Live Loops in Logic Pro X, albeit with substantially less functionality, is to share a Live Loops project from GarageBand for iOS. Live Loops was added to GarageBand for iOS in January 2016, as a new feature for creating music by tapping cells and columns in a grid to trigger different looped instruments and samples. Live Loops includes a library of Apple-designed loop templates in multiple genres, including EDM, Hip Hop, Dubstep and Rock, or you can create your own. Since then, Apple has introduced downloadable Sound Packs to expand the Live Loops sound library.

Logic Pro X was last updated three months ago with version 10.4.8, which included minor bug fixes. Apple tends to update Logic Pro X around every three months, which gives further credibility to the likelihood of an impending update.

This is probably a crossover test app for the new ARM-based macs which are being tested. Apple will want to make sure that its key apps (FCP, Logic etc) can run on the ARM-based macs. It also brings the possibility of running these apps on higher end ipads (now with better mouse and touchpad functionality). some of the functionality in the ios-only apps can be more easily ported to the ARM-based mac platform.

How on earth did you read "ARM" into a story about a prematurely released screenshot showing a pro app?
Score: 22 Votes (Like | Disagree)

And Final Cut Pro X too please, thank you!
Score: 7 Votes (Like | Disagree)

britboyj
The amazing support for Logic and Final Cut makes me *so* sad Apple discontinued Aperture support. To this day, there is no better photo organizer/editor.
Score: 6 Votes (Like | Disagree)

Kind of a harsh reply... it was only a speculation that actually is not so improbable.

I'll concede harsh, but yes, it's quite improbable. It's a feature added to Logic Pro X; that's it. If they want to test running Logic on ARM, they don't need this feature. They just need to compile the existing app on ARM. There is absolutely nothing that connects the two.
Score: 5 Votes (Like | Disagree)
Read All Comments