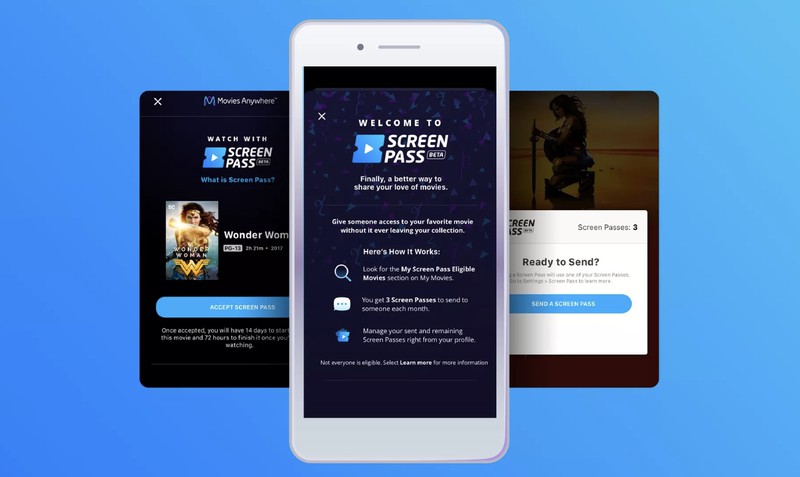 Screen Pass will let you share up to three films each month, and your friend will have seven days to accept the offer, after which they will gain access to the film for 14 days. Once started, recipients will have three days to finish watching the film.

Both users will need a Movies Anywhere account, but there won't be a limit on how many times a film can be shared or how many people you share it with in a month. This means that you can share the same movie to two different people, for example, while still being able to watch it in your own library.

Not every movie will support Screen Pass, but Movies Anywhere said that over 6,000 titles will be eligible when the feature kicks off in beta later today. Eligible movies will be determined by studios, so it's likely that newer releases or very popular films won't see Screen Pass support.

Movies Anywhere is a digital locker service that houses all of your movies from platforms like iTunes, Amazon Video, Vudu, Google Play, Microsoft Movies & TV, Fandango Now, and more. When synced with Movies Anywhere, all of these accounts feed into the central service and let you see your entire digital collection in one place.

The closed beta will start today at 1 p.m. PT, and an open beta is planned for May. Afterwards, a wide launch of Screen Pass is slated for later in the year.

confirmed
Apple should be doing this themselves. Along with Books.
Score: 7 Votes (Like | Disagree)

eNJayBe
Now if only it really was Movies Anywhere and not US only
Score: 5 Votes (Like | Disagree)

julesme
I'd argue that the most urgent problem with Movies Anywhere is that it's still missing support from several movie studios. As a result, you can purchase 100 films on Vudu or Amazon, then find that only 60 of them are available on Apple TV.

Let's get the other studios on board, please.
Score: 2 Votes (Like | Disagree)

DTphonehome
They need to roll this out ASAP. People are going to be really bored on lockdown. Maybe even raise the limit on sharing for now.
Score: 1 Votes (Like | Disagree)

Art Mark
Just hints at the real issue...so you spend your life acquiring digital media. When you die ...? It's tied to YOU. Your account, yes? So can you leave the media to your kid? A spouse? Do they need to keep your email and account active? I don't believe there are any universal rules or solutions here. But a streaming service, monthly payment may be the answer vs. 'buying' anything. Weird to think about.
Score: 1 Votes (Like | Disagree)

This is pretty sweet actually, though you used to be able to share your whole library using UltraViolet a few years ago with something like 3-5 people. So sort of a step back, but this seems like a pretty reasonable middle ground.

Now if only TV shows had a similar digital locker.

TV shows, and the remaining studios...
Score: 1 Votes (Like | Disagree)
Read All Comments