Apple Rejecting Coronavirus Apps Not From Health or Government Organizations

Apple is rejecting apps that are related to the COVID-19 coronavirus that aren't provided by health organizations or government institutions, according to CNBC 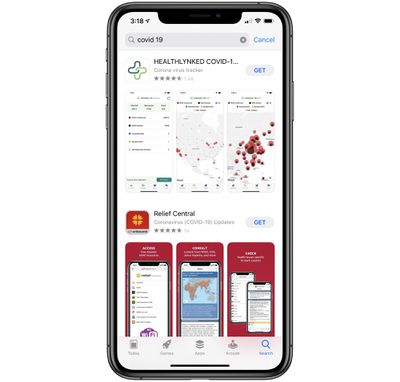 Four independent developers that spoke to CNBC said that their coronavirus apps, which were designed to let people see stats about which countries have confirmed cases, had been rejected.

One developer was told over the phone by an Apple employee that anything related to the coronavirus needs to be released by an official health organization or government, while another received a notice that "apps with information about current medical information need to be submitted by a recognized institution."

Apple has been evaluating and rejecting coronavirus apps to prevent the spread of misinformation, looking at where the health data is sourced from and whether developers represent organizations that users can trust to publish accurate data.

Searches for coronavirus and COVID-19 on the App Store bring up few results, including a COVID-19 virus tracker from Healthlynked that uses World Health Organization data, the Epoch Times, and an app from the Brazilian government.

Other tech companies have taken similar steps to prevent the spread of misinformation. Facebook and Twitter have banned misleading coronavirus-related ads, and Amazon has banned coronavirus products and sellers attempting to price gouge on items like face masks and hand sanitizer.

Google also has a policy against apps that capitalize on a natural disaster or profit from a tragic event and there are no apps related to the coronavirus available from Google Play in the United States.

TheSkywalker77
There's already enough misinformation out there about this virus, we don't need people trying to be official and in need of a quick buck creating more, good move, Apple! :)
Score: 18 Votes (Like | Disagree)

ElectricPotato
Shutting down scams before they do harm? Even when doing so reduces Apple's revenue? I wish all tech giants had that level of ethics.
Score: 10 Votes (Like | Disagree)

cardfan
Now thank big brother for watching over you.
Score: 10 Votes (Like | Disagree)
Read All Comments