Wednesday January 29, 2020 2:11 pm PST by Juli Clover
As the coronavirus outbreak in China continues to spread, Apple today shuttered two more of its retail locations in the country. Stores located in Nanjing and Fuzhou, China, have been temporarily closed, according to Bloomberg.

During yesterday's earnings call, Apple CEO Tim Cook confirmed that one store location in Qingdao, China had already been shut down, bringing the total stores closed to three. Many other stores have limited hours. 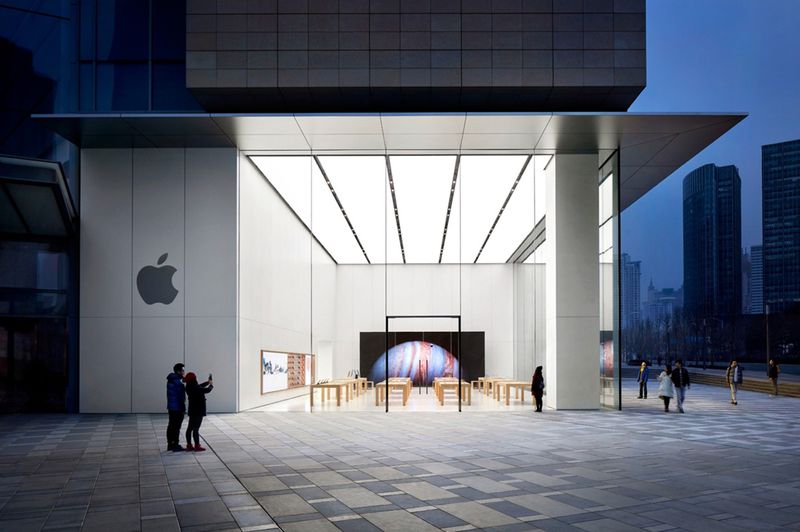 Apple plans to reopen the Nanjing and Fuzhou stores on February 3, while the Apple Store in Qingdao will reopen on February 4.

Apple has limited employee travel to China to "business critical" operations, and it is providing care kits to Apple employees located in Wuhan and across China.

There are more than 6,000 cases of coronavirus, primarily in China, though the virus has been spreading to other countries. Some of Apple's supplier factories in China are going to be closed until February 10 due to Chinese New Year and the outbreak, which Apple CEO ‌Tim Cook‌ said Apple is working to manage to avoid an impact on production.

The virus situation is still emerging, and Apple is continuing to gather data points, says Cook. The company is experiencing a sales slowdown due to the closing of retail stores and shoppers who are afraid to go out. As a result, Apple set its next quarter guidance range at $63 to $67 billion, which is a larger range than normal. Cook said that this $4 billion range is reflective of the coronavirus outbreak and the "uncertainty" around it.

AppleHealth
This must be terrifying to the people of China, if any are on this site who are affected, in sorry this is happening to you. Take all the advice and proportions you can.
Rating: 8 Votes

RalfTheDog
I thought Macs could not get viruses. (Sad joke. I know this is serious and people are dying.)
Rating: 3 Votes

I thought Macs could not get viruses. (Sad joke. I know this is serious and people are dying.)


What was the point of posting this?
Rating: 3 Votes

Researchers in Hong Kong have already developed a vaccine.
The problem, like all vaccines and meds, is that it takes months to test it on animals and then over a year to go through clinical trials on humans. Plus, finding a vaccine for the original strain doesn't mean it will work on the mutated strains.

My point is all of those press releases are just self-promotional junk that does nothing but gets people's hopes up and potentially make politicians look better. Go look for SARS vaccine. There's nearly 20 years of people saying they've found a vaccine, yet nothing has been shown to be safe and effective in humans.
Rating: 2 Votes

Doctor Q
You can track the spread of the Coronavirus using the dashboard (https://gisanddata.maps.arcgis.com/apps/opsdashboard/index.html#/bda7594740fd40299423467b48e9ecf6) created by the Johns Hopkins Center for Systems Science and Engineering.
Rating: 1 Votes

The only way to stop new cars occurring is to stop eat raw bats snakes and other s..it!
I live in Tokyo and quite concerned about an outbreak - 11 cases confirmed, though no dead people for now.


It's crazy thinking about how to contain this. While flights to the US to/from China can be cancelled for a while, every other country in the world would have to do the same as travelers from those countries still come to the US. There was a PC game many years ago that simulated something like this...I forget the name, though.


It was called Windows. It’s still available in version 10. You can even simulate a vaccine on the PC. They call the vaccine Anti-Virus. It’s gotten much better with time. Version 10 is quite decent.
Rating: 1 Votes