Fiat Chrysler Automobiles (FCA) today announced the upcoming launch of its next-generation infotainment system, Uconnect 5. The new version of Uconnect has been rebuilt from the ground up on an Android platform with a number of new features including wireless CarPlay and Android Auto, a familiar-yet-revamped user interface, support for up to five user profiles for customization, Alexa support, improved voice control, and more. 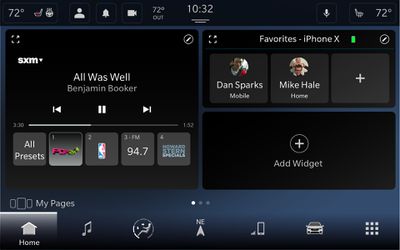 Uconnect 5 home screen
We've been fans of the current Uconnect 4 infotainment system and the way it nearly seamlessly blends ‌CarPlay‌ into the native system, and making ‌CarPlay‌ wireless will no doubt make that experience even better. Many of the other improvements in Uconnect 5 such as enhanced customizability, faster hardware performance, and new features and services should also make for a better user experience.

Uconnect 5 TomTom navigation
Wireless ‌CarPlay‌ has so far been largely limited to a handful of luxury brands like BMW, Audi, and Porsche, with some aftermarket systems also supporting it, but more mainstream manufacturers are on the verge of adding wireless Carplay as they launch major updates to their infotainment technology. Ford announced last October that its SYNC 4 system will support wireless ‌CarPlay‌ in select vehicles, and now FCA is following suit with its family of brands including Chrysler, Dodge, Jeep, Ram, and more.

FCA has yet to announce exactly when and on which models Uconnect 5 will first launch, but it should start rolling out later this year.

canonical
The last thing I want is to be radiated in my own car - especially given research that shows that EMF radiation gets bounced around and amplified within the vehicle. In some cars, I get a pain in my ear from it. Hopefully, the wi-fi component will be a removable module, and one can rip it out.
Score: 4 Votes (Like | Disagree)

Eorlas
Assuming the form factor remains the same as previous UConnect gens (8.4"), it's disappointing that it will be limited to newer vehicles only.

The carplay updated UConnect 4 modules are fully compatible with previous year vehicles (speaking specifically about the Jeep Cherokee in this case) and can be purchased through third party sources.

Mazda did a great thing a year back by offering upgrades at the dealership for a few hundred bucks, and no matter how many times I tweeted at Jeep, they never responded on the subject of potentially offering this service. Kind of silly considering the money they're missing out on.
Score: 3 Votes (Like | Disagree)

The last thing I want is to be radiated in my own car - especially given research that shows that EMF radiation gets bounced around and amplified within the vehicle. In some cars, I get a pain in my ear from it. Hopefully, the wi-fi component will be a removable module, and one can rip it out.

supremedesigner
Still too ugly. I mean, it's very complex layout especially when driving. Perhaps they should copy Tesla's UI ;)
Score: 2 Votes (Like | Disagree)

zombierunner
I wish car manufacturers would just partner with Apple and stick a couple of iPads in the front. Sorted.
Score: 2 Votes (Like | Disagree)

Ya that’s a good point. Wireless CarPlay would really only be feasible if the car came with a wireless charger. Which is also becoming more commonplace.

Apple Discusses How it Created the iPhone 13's Cinematic Mode