Anker in December debuted a new LED flash accessory that's unique because it's the first iPhone flash option that's Apple certified with Made for ‌iPhone‌ approval.

Anker started accepting pre-orders for the flash earlier this month ahead of a launch in late January, and we were able to get our hands on the LED flash to try it out.

Subscribe to the MacRumors YouTube channel for more videos.
Priced at $50, the LED flash from Anker is designed to work with Apple's newest iPhones, which means it is compatible with the iPhone 11, 11 Pro, and 11 Pro Max.

There have been other flash accessories on the market in the past, but these have all worked over Bluetooth. Anker's LED flash has a Lightning cable that plugs right into the Lightning port on the ‌iPhone‌, so it's perfectly synced with the rear cameras and goes off at just the right time. 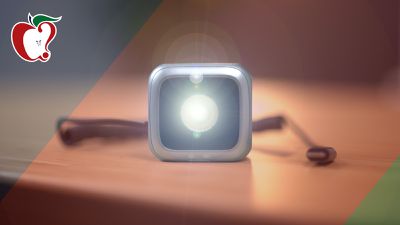 Design wise, the flash is a little cube with an LED bulb at the front, a Lightning cable at the bottom, and a power button at the side. It comes equipped with a storage pouch and a little diffuser accessory to make the lighting less harsh for when you want a softer look. At the side opposite the power button, there's a tripod mount so you can mount it if desired, but holding it is an option too.

Anker's flash is equipped with a 700mAh battery, which is good for approximately 10,000 shots in flash mode or 50 minutes of light during video capture. Using the flash for video requires putting it into a flashlight mode, which can be done by pressing on the power button.

Once the battery has been exhausted, it will need to be recharged, which can be done with a 5W charger and a USB to Lightning cable. Recharging takes about 75 minutes.

Using the flash with the ‌iPhone‌ requires no setup because of the Lightning cable. Once it's plugged in, it works with the built-in Camera app of the ‌iPhone‌ when the flash is turned on, and it can also work in third-party apps.

According to Anker, the flash accessory is meant to offer 4x more light than the standard built-in flash of the ‌iPhone‌, which has always been weak and often of very little use for most images.

Anker's flash provides more even lighting throughout the image, and it provides a cooler color temperature. You can see the difference between no flash, the built-in flash, night mode, and the Anker flash accessory in the images below.

The LED flash from Anker puts out quite a bit of light, which is useful for photos and videos alike in low lighting conditions. The diffuser is a useful tool too, as seen in these comparison images.

For those who are into ‌iPhone‌ photography, Anker's little cube flash is a tool that will give you more options when capturing images and videos, and it's certainly more useful than Apple's built-in flash.

Those interested in the Anker flash can pre-order it from Amazon for $50, with orders set to ship out on January 25.

I’ll wait till my flea market has it. Apparently they’ve gotten many Anker return products. Got a 20000mAh Anker portable charger for $15. Works well.

Those aren't Anker returns, they’re knockoffs. Not worth much, and possibly dangerous, who knows. Buy them if you want, but just realize they’re counterfeit.
Score: 7 Votes (Like | Disagree)

kissmo
Not convinced.
Off camera flash should have a longer cable since you want to light your subject from and angle which complements their features.
The cable looks so short and both flashes fire.... good concept but flawed.
I don’t like direct flash on subject on full frontal. Makes horrible 1990’ type of disposable camera shoots.

Shame that you need to plug it in, would be better if it sensed camera flash and went off using that or WiFi signal. And also be good if you could use a few of them instead of just one ?

WiFi fails. The flash needs to sync with the shutter. You need different interface to do that: radio or infrared.
Score: 3 Votes (Like | Disagree)

Stromos
How much of a kickback is Anker getting from Apple making this only work on new devices?
Score: 2 Votes (Like | Disagree)

Aston441
12 or so years ago i had a Motorola ZN5 phone with Xenon flash and Kodak Camera built in.

Many of the pictures that thing took in the dark look better than any modern phone to this day. I still have all the pics from that thing. I miss it.
Score: 1 Votes (Like | Disagree)

SDJim
Those Night Mode shots, tho ?
Score: 1 Votes (Like | Disagree)

Rudi T
Shame that you need to plug it in, would be better if it sensed camera flash and went off using that or WiFi signal. And also be good if you could use a few of them instead of just one ?
Score: 1 Votes (Like | Disagree)
Read All Comments