Anker today debuted a new Made for iPhone (MFi) certified LED flash accessory that's designed to connect to the iPhone 11, 11 Pro, and 11 Pro Max through the Lightning port.

Though a product link is not yet available, The Verge says that the new accessory is launching next month and is priced at $49.99. 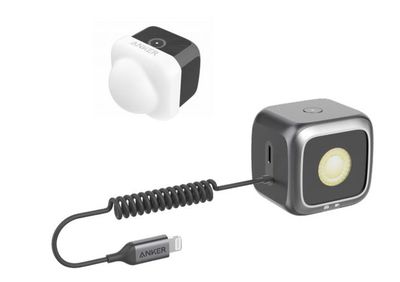 The flash accessory will be recognized by the new iPhones and can be triggered by the default Camera app and third-party camera apps. It will last for approximately 10,000 shots per charge and comes with a detachable diffuser option.

Compared to the built-in ‌iPhone‌ flash, Anker says that the flash can achieve twice the range and four times the brightness.

Anker's new flash option is the first Made for ‌iPhone‌ flash accessory that's been designed, but as Apple has now opened up its Made for ‌iPhone‌ program to these kind of camera accessories, we can expect additional Lightning-based flashes to be released in the future.

‌iPhone‌ flashes are not new and there have been other options available in the past, but this is the only one that is Apple certified and able to be synced with the ‌iPhone‌'s camera through Lightning.

Relentless Power
Anker is a great company with a solid reputation with build quality (Especially with their battery chargers).
Score: 14 Votes (Like | Disagree)

Trik
Am I missing how this is supposed to anchor to the iPhone? Or do they expect me to hold it like some old timey photographer?

Am I missing how this is supposed to anchor to the iPhone? Or do they expect me to hold it like some old timey photographer?

If you don't understand the benefits of an off camera flash, then an off camera flash is not for you. I never use the built in flash on my camera unless I have nothing else. Hail, I've even used a flashlight and a white sheet of paper on several occasions. It wasn't great but preferable to flat lighting of a built-in flash.
Score: 10 Votes (Like | Disagree)

... but you might as well buy a dedicated compact camera. You’ll get way better pictures..

I'm pretty sure the market for compact cameras is nearly dead now, as the quality was nearly equalled by top smartphones, and the only (disappearing) advantage is optical zoom.
Score: 4 Votes (Like | Disagree)

I think in principle it's a pretty nice idea. Nevertheless I will buy an off iPhone flash as soon as it has a nice form factor of e.g. a 1/4 iPhone. It then will fit in my pocket and still has the volume needed to integrate a powerful battery. But this Anker device looks too much like a funny game cube for me.

At least I would be really enthusiastic if one can use several flashes via Bluetooth like a professional DSLR, because then you can shot really great effects. Also a specifiable flash sequence would be great. OK, Anker has now initiated the run, now I'll wait and see what comes next.

Maybe Apple will grace us with something really professional...

I think they corded it to reduce any lag in activating the flash. There's going to be some lag with Bluetooth.
Score: 3 Votes (Like | Disagree)

Why LED? The iPhone already has an LED flash. This would be a lot more useful if it were a xenon flash tube that can put out a lot more light and freeze action.

I hope some company releases a true xenon flash accessory for the iPhone; that would rock.

First, there is already a Xenon flash accessory for the iPhone, the Godox A1. But, it's based on Bluetooth, not Lightning, and you have to use their dedicated app, not the built-in camera.

It's hard to say how this flash works without more details, but my guess as to why it is LED is because of limitations due to the iPhone cameras using a "rolling shutter". Because of this, the lighting source has to be more "continuous", so to say, than what a Xenon flash can provide (at least without severely limiting the shutter speed as what the Godox A1 does -- hence requiring a dedicated app).

I’m quite certain it’s because of power consumption.

Please see my previous post. My guess it is probably due to sync speed with the rolling shutter.

However, what you say does have some merit. In theory, you can "strobe" a Xenon flash in a similar way to what is used for high-speed-sync with camera systems using a "focal plane" shutter. This then simulates a "continuous" stream of light. As you alluded to, this would require substantially more power and large capacitors. At the same time, power output would be greatly reduced to a point where a continuous LED would be just a good in most cases.
Score: 3 Votes (Like | Disagree)
Read All Comments