iPhones from Apple and smartphones from Samsung did not violate FCC rules on maximum radiofrequency exposure levels, the FCC said today (via Bloomberg).

Back in August, an investigation launched by The Chicago Tribune suggested that some of Apple's iPhones were emitting radiofrequency radiation that exceeded federal safety limits. 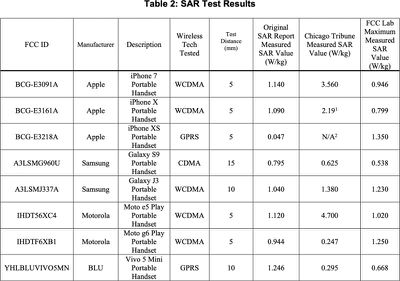 Apple at the time disputed the results and said that the testing was inaccurate "due to the test setup not being in accordance with procedures necessary to properly assess the ‌‌iPhone‌‌ models."

"All ‌‌iPhone‌‌ models, including ‌‌iPhone‌‌ 7, are fully certified by the FCC and in every other country where ‌‌iPhone‌‌ is sold," the statement said. "After careful review and subsequent validation of all ‌‌iPhone‌‌ models tested in the (Tribune) report, we confirmed we are in compliance and meet all applicable ... exposure guidelines and limits."

In response to the investigation, the FCC promised to do its own testing of smartphones from Apple and Samsung, and the FCC's testing disagrees with the findings from The Chicago Tribune.

The FCC tested the ‌iPhone‌ 7, the ‌iPhone‌ X, and the ‌iPhone‌ XS using models that were purchased from the open market and those provided by Apple. No FCC test showed the results that The Chicago Tribune got from its independent testing.

All sample cell phones tested by the FCC Laboratory, both grantee-provided and FCC- purchased samples, produced maximum 1-g average SAR values less than the 1.6 W/kg limit specified in the FCC rules. Therefore, all tested sample devices comply with the FCC RF radiation exposure general population/uncontrolled limits for peak spatial-average SAR of 1.6 W/kg, averaged over any 1 gram of tissue as specified in 47 CFR Sn. 2.1093(d)(2), and these tests did not produce evidence of violations of any FCC rules regarding maximum RF exposure levels.

Full results from the testing can be seen in the document released today by the FCC. [PDF]

Fegan Scott filed a lawsuit against Apple, claiming to use "actual use conditions" in its test, rather than "conditions set by manufacturers." The FCC modeled its testing after the testing done by The Chicago Tribune, evaluating the ‌iPhone‌ by using a fluid-filled head and body replica and testing RF absorption at the highest possible smartphone power levels.

The law firm did not provide details on its testing methods and it is not clear if the case will progress now that the FCC's research and testing has worked out in Apple's favor.

perhaps the iPhones pass a specific test, but obviously they DO emit harmful radiation when kept close to the body. The iPhone hasn't been vindicated. It's still hazardous to hold it close regardless of what the FCC tests shows

Obviously? On what basis do you think this is so obvious? I have seen zero evidence to support any claim that iPhones emit ionizing radiation. (Because they don’t.)
Score: 13 Votes (Like | Disagree)

Crappy Intel modem in the iPhone XS emitting way too much.

Who wants to bet those idiotic lawyers don’t drop their lawsuit and will claim the FCC numbers are wrong?
Score: 7 Votes (Like | Disagree)

twocents
Main counterargument is it's in Apple's best interest to keep their customers healthy and living longer to buy more products. Pumping out hundreds of millions of radiation emitting devices would undercut that
Score: 7 Votes (Like | Disagree)

Crappy Intel modem in the iPhone XS emitting way too much.

Thursday September 29, 2022 12:38 pm PDT by Juli Clover
Tony Blevins, Apple's vice president of procurement, is set to depart the company after he made a crude comment about his profession in a recent TikTok video, reports Bloomberg. Blevins was in a video by TikTok creator Daniel Mac, who was doing a series on the jobs of people he spotted with expensive cars. After seeing Blevins in an expensive Mercedes-Benz SLR McLaren, Mac asked Blevins what ...
Read Full Article • 407 comments