Chicago-based law firm Fegan Scott has levied a lawsuit against both Apple and Samsung, claiming that independent testing suggests the radiofrequency radiation levels in recent smartphones "far exceeded the federal limits" when used "as marketed by the manufacturers."

The basis for this lawsuit dates back to August, when The Chicago Tribune launched an investigation into the radiofrequency radiation levels output by popular smartphones. 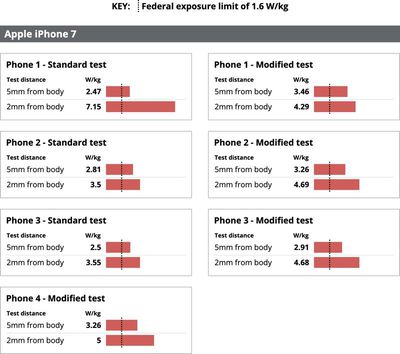 RF Radiation Testing Results from a Chicago Times Investigation in August
The paper hired an accredited lab to test several smartphones according to federal guidelines, and found that some of Apple's iPhones are allegedly emitting radiofrequency radiation that exceeds safety limits.

Apple disputed the results and in a statement, said that the testing was inaccurate "due to the test setup not being in accordance with procedures necessary to properly assess the ‌iPhone‌ models."

"All ‌iPhone‌ models, including ‌iPhone‌ 7, are fully certified by the FCC and in every other country where ‌iPhone‌ is sold," the statement said. "After careful review and subsequent validation of all ‌iPhone‌ models tested in the (Tribune) report, we confirmed we are in compliance and meet all applicable ... exposure guidelines and limits."

Fegan Scott enlisted an FCC-accredited laboratory to do its own testing of six smartphone models at distances ranging from zero to 10 millimeters to measure the radiofrequency radiation emitted when touching or in close proximity to the body.

"Apple and Samsung smartphones have changed the way we live. Adults, teenagers and children wake up to check their email or play games and do work or school exercises on their smartphones. They carry these devices in their pockets throughout the day and literally fall asleep with them in their beds."

"The manufacturers told consumers this was safe, so we knew it was important to test the RF radiation exposure and see if this was true. It is not true. The independent results confirm that RF radiation levels are well over the federal exposure limit, sometimes exceeding it by 500 percent, when phones are used in the way Apple and Samsung encourage us to. Consumers deserve to know the truth."

According to Fegan Scott, the testing conducted by the lab reflects "actual use conditions" rather than the "conditions set by manufacturers," which means the testing was likely not done in the same way that Apple does its own internal testing. Apple, for example, tests at 5mm, not 0mm and 2mm.

The Chicago Tribune's original testing was done in a manner to simulate the worst possible scenario, with the phone operating in low signal and full power to create the maximum radiofrequency radiation level. It's not clear how the law firm's testing was carried out.

There is no evidence that radiofrequency radiation levels above the federal limits have the potential to cause harm, so consumers should not be alarmed at this time. The FCC is doing its own independent testing and those results should provide more insight into the safety of smartphones.

Apple tells its customers worried about radiofrequency radiation exposure to use a hands-free option, and some past ‌iPhone‌ models have included recommended carrying distances. With the ‌iPhone‌ 4 and 4s, for example, Apple said the smartphones should be held at least 10mm away from the body, and there was a similar suggestion made for the ‌iPhone‌ 7.

The lawsuit is seeking damages from Apple as well as funds to pay for medical monitoring.

codewrangler
If true, they should be suing the FCC, since they blessed the devices for consumer use. You can't blame Apple or Samsung for complying with FCC radio power requirements. You need to change the standard that the FCC uses...this is baseless litigation.
Score: 30 Votes (Like | Disagree)

SVTmaniac
3.6 Roentgen. Not great, not terrible.
Score: 30 Votes (Like | Disagree)

Exactly. I don't know how many times I've tried to explain to my dad that "emf" is on the opposite end of the spectrum of the radiation that can give you cancer - physics dictate that the worst that can happen to you from these frequencies is that you might get a little warm.

I wonder why nobody freaked out about this in the 80s and 90s when analog cellphones were transmitting an entire watt or more ERP, yet nobody got hurt by that. Modern phones put out a tiny fraction of that, and people are freaking out.

I'm so tired of this excessive paranoia.
Score: 16 Votes (Like | Disagree)

Exactly. I don't know how many times I've tried to explain to my dad that "emf" is on the opposite end of the spectrum of the radiation that can give you cancer - physics dictate that the worst that can happen to you from these frequencies is that you might get a little warm.

Edit to add: They might have been able to get away with suing for damages because of exceeding the federal limits, but since they're asking to pay for medical monitoring, I wonder if they are going to have to try to prove that there is a medical danger from being exposed to this radiation (which they won't be able to do). It would be great if this turned into a high-profile case that finally laid this insanity to rest.
Score: 13 Votes (Like | Disagree)

Black Belt
Can I sue the universe for emitting radio radiation for the past 100 billion years with no government oversight?
Score: 13 Votes (Like | Disagree)