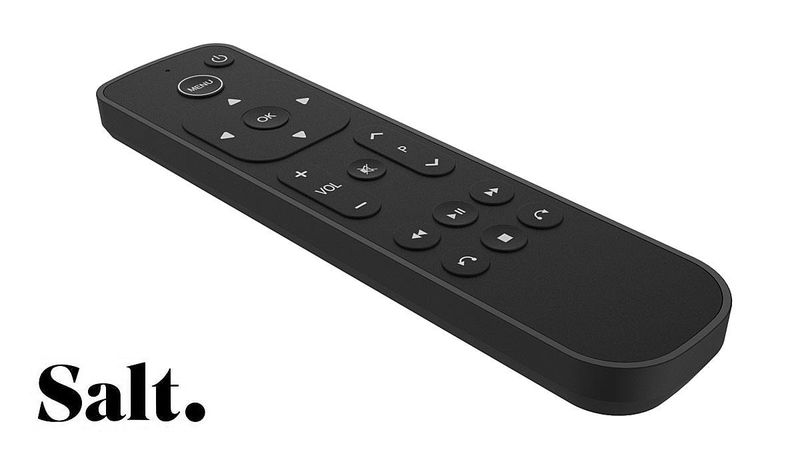 Costing just under 20 Swiss francs, the optional remote was reportedly developed in close collaboration with Apple, after a sizable section of Salt TV's customer base apparently complained about the poor usability of the Apple Remote that comes with every ‌Apple TV‌ 4K.

Thanks to Apple's input, the alternative remote doesn't require any pairing with ‌Apple TV‌ and works out of the box. It includes directional arrows in place of the Siri Remote's glass Touch surface, a power button in addition to a Menu button, along with separate volume and channel rockers and traditional media playback buttons.

There's no microphone button in evidence, presumably because ‌Siri‌ on ‌Apple TV‌ isn't officially available in Switzerland, and there's no numerical channel buttons because tvOS doesn't support the function. Otherwise, it resembles a standard TV remote that should be more amenable to Salt TV's users, who can also look forward to an updated Salt TV app interface on ‌Apple TV‌.

It's unclear if this is a one-off ‌Apple TV‌ hardware collaboration between Apple and a regional third-party, although having said that, Apple recently made Microsoft and Sony controllers compatible with tvOS and iOS, so maybe this indicates a new trend.

Either way, Apple has obviously listened to feedback and decided its ‌Siri‌ Remote isn't the most optimal design for enjoying multi-channel TV navigation after all. The alternative remote control for Salt TV can be set up to work with almost all standard TV sets, and is available to order on the Salt online store.

arnoz
Based on the interest mentioned in above comments, I guess I should just buy a ton of their remotes and re-sell them to people living outside of Switzerland for a 30% markup :p
Rating: 13 Votes

I agree the standard remote isn’t awesome, but how much do you really need to use it? Once you start watching, the remote use is pretty limited.

I just use the remote on my iPhone anyway.


This is why the average joe shouldn't be allowed anywhere near the design and development of hardware or software. Did you really just suggest that finding your iPhone, Swiping on it, Tapping on the remote app/widget, is easier than a dedicated dumb piece of hardware that is always next to the couch?

Mojohanna32
I dislike the current ATV remote quite a bit. Too small, the multifunction glass touch pad is a PITA. The entire remote needs backlit buttons. At least with the last update they changed how the ATV turns on. The default now is that you have to press the menu button. Before I was always turning on the TV inadvertently just by picking up the remote.
Rating: 9 Votes

Braderunner
The interface, and the remote need re-done. The Apple TV is the most un-Apple-like product that is made by Apple.
Rating: 8 Votes

Azeroth1
Sign me up. I would be. The trackpad navigation is frustrating and slower than buttons.
Rating: 8 Votes

WANT! But I don’t see a way to order from the online store, it just directs you to a store locator in Switzerland. I’m in the USA. Can I not order this from the USA? Anyone else have any luck?

SwissTester
Grüezi from Switzerland.
Installation took me 30 secs. It works fine with my Sony TV and Sonos-Bar. Even the typing in the movie-app search was faster than with the original remote. 20 franks... 20 bucks... good deal. Now even my mother-in-law will be able to use our tv ;-) It kind of is actually.

I use my iPhone instead of the ATV remote >90% of the time I use my ATV.

Every time I do, I am amazed that I need to use a $750 device to control my $150 ATV because the included ATV remote sucks so badly.

JWort93
Given the lack of need to pair, and no microphone, I'm going to assume it's an IR remote, and not a bluetooth remote, so I'd have no interest in it.
Rating: 5 Votes

frozen220
WANT! But I don’t see a way to order from the online store, it just directs you to a store locator in Switzerland. I’m in the USA. Can I not order this from the USA? Anyone else have any luck?
Rating: 5 Votes
[ Read All Comments ]