Swedbank, one of the largest banks in Sweden, has today announced support for Apple Pay. 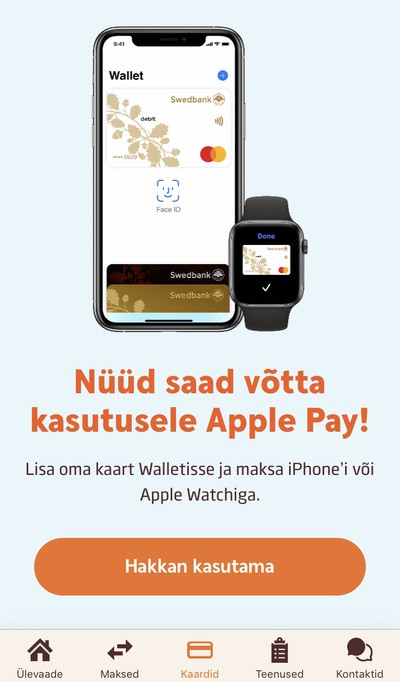 "We want to be able to provide our customers a good range of digital and mobile services and ‌Apple Pay‌ is a sought-after service among our customers. We are pleased to now be able to broaden our mobile payment offer with yet another secure and smart alternative, which will provide lots of added value for our customers", said Lotta Lovén, Head of Digital Banking at Swedbank.

Swedbank customers are now able to add their Mastercard credit cards and Maestro debit cards to the Wallet app by tapping the plus button in the top-right corner.

‌Apple Pay‌ can be used anywhere contactless payments are accepted with a compatible iPhone or Apple Watch. It is also accepted by select apps and websites.

‌Apple Pay‌ launched in Sweden in October 2017, and with Swedbank now on board, up to 4.1 million more customers can gain access to the service in the country.

‌Apple Pay‌ will be available in more than 40 countries and territories by the end of 2019, according to Apple CEO Tim Cook.

(Thanks to a tipster from Estonia!)

Pupi
Saw immediately from the language looking more Finnish than Swedish, that it couldn’t be Sweden. I don’t know, seems a bit inaccurate reporting to imply this is a release in Sweden, when it actually affects multiple countries where Swedbank has a presence.
Score: 5 Votes (Like | Disagree)

Saw immediately from the language looking more Finnish than Swedish, that it couldn’t be Sweden. I don’t know, seems a bit inaccurate reporting to imply this is a release in Sweden, when it actually affects multiple countries where Swedbank has a presence.

The language is actually Estonian, very similar to Finnish, but extremely different from Swedish.
Score: 3 Votes (Like | Disagree)

Saw immediately from the language looking more Finnish than Swedish, that it couldn’t be Sweden. I don’t know, seems a bit inaccurate reporting to imply this is a release in Sweden, when it actually affects multiple countries where Swedbank has a presence.

Actually it's Estonian. Swedbank is also the largest bank in the Baltics (Estonia, Latvia and Lithuania). Apple Pay launched in Sweden and in Baltics together.
Score: 3 Votes (Like | Disagree)

Stalwart
Too late. While they were slow with ApplePay i discovered that literally every other bank provides better customer service.
Score: 2 Votes (Like | Disagree)

Apple Pay is not a bank, it's a payment method. I am curious how is your bank payment method more superior than Apple Pay. Does it work if you leave card home? Can it work online and in other apps? Does it protects your card details from the seller and generates random tokens to prevent creepy tracking? Does it stores your card information in the secure enclave.

I think he meant to criticize Swedbank, not Apple pay; he meant Swedbank entered the game too late by taking too long to support apple pay, because other banks supported it before and those other banks also offer a better overall customer experience than Swedbank.

I’m pretty sure that he meant something else.

Yeah, that poster was clearly criticizing the bank mentioned in the article, Swedbank, for entering the apple pay game too late, not Apple Pay. I’m sure he loves apple pay, he already changed banks anyway to be able to use it, and probably other people did the same, hence why he says it’s too late for Swedbank.
Score: 2 Votes (Like | Disagree)

The language is actually Estonian, very similar to Finnish, but extremely different from Swedish.

Yeah, then I also figured from the Macrumors post it was Estonian. I knew it wasn't exactly Finnish, as I'm a bit of a Finnish speaker myself, just looked funnily close enough. It's also a trip when I hear Estonian. It's like I understand what it's being said, but not quite.
Score: 1 Votes (Like | Disagree)
Read All Comments