Apple will release four new iPhone models during its fall update cycle, all of which will support 5G connectivity, according to JPMorgan analyst Samik Chatterjee (via CNBC).

Based on channel checks, Chatterjee believes Apple will release a 5.4-inch ‌iPhone‌, two 6.1-inch iPhones, and one 6.7-inch ‌iPhone‌. 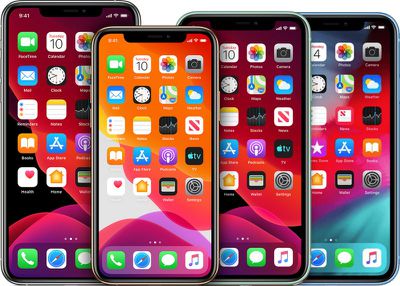 Chatterjee's prediction is a bit of a deviation from current rumors, which have suggested we'll see a lineup similar to the 2019 lineup with 5.4 and 6.7-inch higher-end iPhones and a lower-cost 6.1-inch device.

Two of the higher-end iPhones will be equipped with new rear camera technology with "world-facing" 3D sensing for improved augmented reality capabilities, while the others will use dual-lens setups similar to the ‌iPhone‌ 11.

There could also be a split between the type of 5G connectivity offered by each ‌iPhone‌. The two higher-end iPhones could offer support for the fastest 5G technology, mmWave, while the two lower-end iPhones may be limited to the sub-6GHz spectrum, which is not as speedy but has a wider range.

mmWave 5G technology will likely be limited to major cities and dense urban areas because of its short range, while 5G networks in rural and suburban areas will use the slower sub-6GHz technology, such as the 600MHz network T-Mobile is rolling out.

Rumors have suggested Apple is going to use Qualcomm's X55 modems in all of its 2020 iPhones, and while those modems do support both mmWave and sub-6GHz spectrum, an additional mmWave antenna is needed for mmWave support.

To make the lower-end iPhones more affordable, Apple could potentially limit the mmWave antenna to higher-end models, though prior rumors have suggested Apple's aim with its 2020 iPhones is to match the technology in more affordable 5G Android smartphones, which do support mmWave.

Starting in 2021, Chatterjee believes Apple will make some significant changes to its ‌iPhone‌ release cycles. "Based on our supply chain checks, we are expecting a strategic change in the launch cadence with the release of two new ‌iPhone‌ models in 1H21 followed by another two in 2H21, which will serve to smooth seasonality around the launch," he wrote.

Apple has been launching new iPhones in the fall since 2011, and the note from Chatterjee provides little additional information on the potential split if Apple does pursue a new launch timeline.

Apple could release lower-end devices earlier in the year and then save its higher-end launches for the fall, but Chatterjee's current prediction would see Apple releasing four iPhones in September 2020 and then two additional iPhones in the first half of 2021, for a total of six iPhones within six months, which seems like a bit of a stretch.

farewelwilliams
I liked it better when all I had to do was just look at which storage option I wanted.
Score: 37 Votes (Like | Disagree)

eatrains
Hope they don't neuter the 5.4". Give us a great phone in a great size! Not everyone wants to carry tablets around.
Score: 26 Votes (Like | Disagree)

Don't force everyone to get giant phones.
Score: 21 Votes (Like | Disagree)

Whats the point in a new small size if its going to be an “XR” type iPhone! not having full features!?
Score: 9 Votes (Like | Disagree)

This would be terrible. Not everyone wants a big ass chub in their hands. Some of us want a higher-end phone they can operate with one hand. 5.4” is just about right to work with one hand.
Score: 8 Votes (Like | Disagree)
Read All Comments