T-Mobile today announced that its 600MHz 5G network has gone live across the United States, bringing 5G connectivity to those who have a compatible smartphone.

According to T-Mobile, its 5G network covers more than 200 million people and more than 1 million square miles, though connectivity is limited to the OnePlus 7T 5G McLaren and the Samsung Galaxy Note 10+ 5G, both of which are launching on the T-Mobile network this Friday.


There are currently no iPhones that are compatible with T-Mobile's 5G network, with Apple planning to release its first iPhones that support 5G connectivity in 2020.

T-Mobile's 5G network is a 600MHz network, which gives it greater range than the mmWave 5G networks other carriers like AT&T and Verizon are focusing on, but less speed. T-Mobile's 5G is faster than 4G, but it won't reach some of the blazing fast speeds that are possible with mmWave technology.

When 5G is mentioned, most people are talking about millimeter wave spectrum, which offers blazing fast data transfer speeds, but it is sensitive to interference from buildings, trees, and other obstacles and it is best suited to use in dense, urban locations. 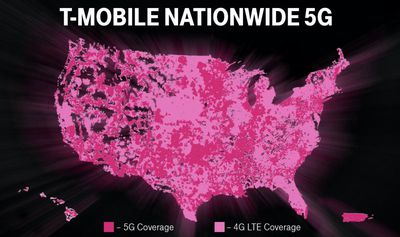 5G in rural and suburban areas will be on mid and low-bands, which is also known as sub-6GHz 5G, simply because of the restrictions of the mmWave technology. From T-Mobile CEO John Legere:

"5G is here on a nationwide scale. This is a HUGE step towards 5G for All. While Dumb and Dumber focus on 5G for the (wealthy) Few, launching in just a handful of cities -- and forcing customers into their most expensive plans to get 5G -- we're committed to building broad, deep nationwide 5G that people and businesses can access at no extra cost with the New T-Mobile ... and today is just the start of that journey."

T-Mobile says that its 5G network goes "far beyond the limitations" of 5G networks from other carriers, bringing 5G to more people in more places, with coverage available in a map on the T-Mobile website. According to T-Mobile, after its merger with Sprint is completed, the new larger company will be able to further expand its 5G network.

JimmyHook
side note, there’s no point to buying a 5G phone now anyway. The specs will likely change and compatibility will be a huge issue. Switching to another carrier’s 5G etc will be a pain or impossible. It’ll be better to wait until 5G is standardized before buying one
Score: 14 Votes (Like | Disagree)

The coverage map means nothing. Even now and during the busy daytime T-mobil still throttles the speed of the LTE. Mine hits only about 0.5mps, but during the wee hours of the morning it goes up to 15-17mps.

This is, of course, anecdotal. I get 30-45 down during peak hours and 80-120 during non-peak. It’s all about where you live, your home’s physical characteristics, distance from tower, etc.
Score: 8 Votes (Like | Disagree)

Ducksnort
And look for AT&T to launch its “6Ge” service by the end of the week... /s
Score: 7 Votes (Like | Disagree)

smithrh
It's real 5G. There's nothing wrong/illegal/immoral about having 5G on a lower band.

It's an interesting combination, to be sure. 600 MHz is a low frequency for cell coverage, which (in general) means it will travel farther.

But it's also somewhat meaningless, without knowing the actual buildout specs - bandwidth used, backhaul available, etc and so on and so forth.
Score: 7 Votes (Like | Disagree)
Read All Comments