Following yesterday's report on Apple's new 16-inch MacBook Pro which could be announced as soon as Wednesday, Bloomberg journalist Mark Gurman this morning shared some additional details about the upcoming machine via Twitter. 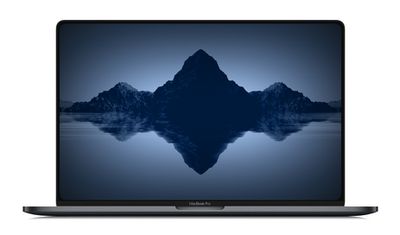 According to Gurman, the display on the new MacBook Pro is less than four percent larger than the current 15.4-inch MacBook Pro, suggesting to him that "it's really going to be about the higher resolution" rather than a significant material increase in screen real estate.

Gurman offers no clues as to the exact resolution, but reliable IHS Markit analyst Jeff Lin claimed in June that the 16-inch MacBook Pro would feature an LCD panel with a resolution of 3,072×1,920 pixels supplied by LG Display. For comparison, the 15-inch ‌MacBook Pro‌ has a resolution of 2,880×1,800 pixels.

The screen on the new MacBook Pro is less than 4% larger than the current 15.4 inch. So it’s really going to be about the higher resolution, impressive speakers, noise cancelling microphones and of course the all new keyboard (similar to the iMac external Magic Keyboard). — Mark Gurman (@markgurman) November 13, 2019

Otherwise, Gurman reiterates Apple's focus on providing users with a more reliable keyboard that uses a new scissor switch mechanism, which is "similar to the iMac external Magic Keyboard."

The new 16-inch machine, which will be the largest laptop Apple has offered for sale since the 17-inch ‌MacBook Pro‌ was discontinued, will replace the current 15-inch model and "cost about the same," Gurman revealed on Tuesday. The 15-inch ‌MacBook Pro starts at $2,399.

Apple is said to have been holding private press briefings at its luxury loft mansion in New York City this week, likely providing media sites with review units for first impressions. Apple will surely announce the new 16-inch ‌MacBook Pro‌ via press release, as there are no more Apple events expected this year.

Mac Fly (film)
A reliable keyboard and physical escape key is what devs are after. No SD card sucks—when they removed floppy they at least replaced it with another fledgeling solution that had technical superiority. They removed SD-card and didn't at least work with camera companies to provide a wireless-mount replacement solution? Apple has the talent. Why not? They basically said f-u to pro and am photographers—"go get your cable from the bag up stairs, b****". "Go buy a dock...go dongletown". No MagSafe, no cord management and no charge-status light also sucks. Backward innovation? Keyboards that don't work? Where is all of this headed? Thankfully, they are apparently fixing this disastrous 4-year keyboard mess. They made their phones thicker when we complained loud enough. Now fix the rest of the issues with these Mac portables. Make them more practical and useful again. Think of users.
Score: 23 Votes (Like | Disagree)

gplusplus
It would be great if Apple would stop charging the same for storage upgrades as they did 5 years ago. There’s no earthly reason to charge $400 to upgrade from 256 gb to 1 tb storage in the year 2019.
Score: 16 Votes (Like | Disagree)

Sorry to those of you who were certain it would be 2020
Score: 9 Votes (Like | Disagree)

Where have you been? It was released back in 2015.
Score: 6 Votes (Like | Disagree)
Read All Comments