Friday October 25, 2019 1:07 pm PDT by Joe Rossignol
Apple plans to use a low-power backplane technology called LTPO for future iPhones, according to Korean website The Elec. The backplane is responsible for turning individual pixels on and off on the display. 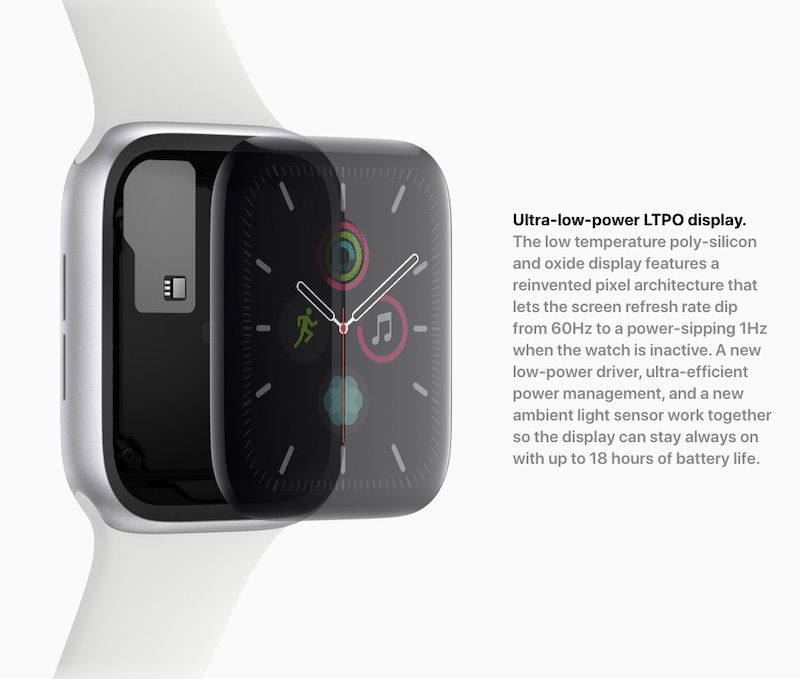 Apple, meanwhile, is moving to more widely apply LTPO panels to its iPhones. This means it needs to find ways to work together with Samsung Display, which is holding its own in terms of both technological prowess and production capacity in the small and mid-sized OLED sector.

The low temperature poly-silicon and oxide display features a reinvented pixel architecture that lets the screen refresh rate dip from 60Hz to a power-sipping 1Hz when the watch is inactive. A new low-power driver, ultra-efficient power management, and a new ambient light sensor work together so the display can stay always on with up to 18 hours of battery life.

Apple's transition to OLED started small with the original ‌Apple Watch‌ in 2015, followed by the iPhone X in 2017, so it would not be surprising if LTPO expands from the Watch to the ‌iPhone‌ as early as next year.

I just hope they would have ironed out any possible battery impacts by then.

What battery impacts? Nothing is free... even power sipping is, well, power sipping. It IS going to use power when always on. If you don't like that, you can turn off 'always on.' Problem solved. Physics.

Edit: I like 'always on' on my Series 5 and accept it might drain the power slightly faster. Not a real life problem for me. But when I fly overseas I turn it off to get the last bit of power out.
Rating: 8 Votes

chris4565
Next year‘s iPhone is shaping up to be a really compelling hardware upgrade if all the rumors will come true: 120 Hz display, 2-way charging, USB-C, 5G, Time of Flight sensor, a new frame design and now this. Really looking forward to the 2020 iPhones.
Rating: 7 Votes

Wait the 4 and 5 have this tech? So is the battery the only reason the 4 doesn't have always on?


Didn’t the teardowns reveal that both models have the exact same battery? I’m pretty sure it’s just typical Apple holding back on those software upgrades in order to sell the newer model.
Rating: 6 Votes

Knowing Apple, they will reduce the battery size and make it thinner instead of passing on the higher battery live.


Considering this is a watch, I think I'm more willing to accept battery compromises for the sake of a flatter body
Rating: 5 Votes

Where did this say they are going to be always-on displays? I just got the impression they plan to use the lower power displays in general for what would amount to a decent amount of battery savings.

Knowing Apple, they will reduce the battery size and make it thinner instead of passing on the higher battery live.

Considering they have increased thickness and battery size for a few years now, I think are actually listening to customer and prioritizing it. What it will likely enable is 5G radio usage to get the same battery life as LTE where Android phones may have to take a big hit.
Rating: 4 Votes

mtneer
I just hope they would have ironed out any possible battery impacts by then.
Rating: 4 Votes

SAIRUS
Wait the 4 and 5 have this tech? So is the battery the only reason the 4 doesn't have always on?
Rating: 4 Votes

ElectricPotato
Apple could paint a static clock face on the watch. 0Hz is really power sipping and is guaranteed to be right twice a day.
Rating: 3 Votes

gplusplus
Finally, some hardware upgrades that add new functionality, not just a new camera or a faster processor. I welcome this, and more.
Rating: 3 Votes