Apple shares are currently trading above the $234 mark on the intraday market, setting a new all-time high for the company. As noted by CNBC, the stock's previous all-time high was $233.47 in October 2018. 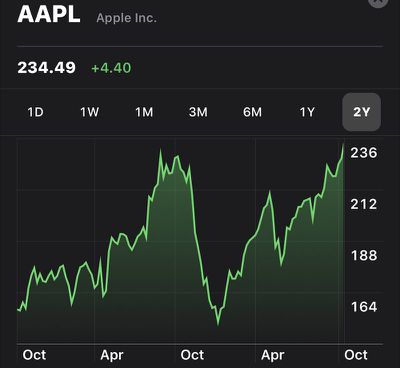 AAPL has surged nearly 10 percent over the past month, fueled in part by multiple reports indicating that iPhone 11 and iPhone 11 Pro sales have been better than expected so far in several countries, including the United States, China, and India, something that Apple CEO Tim Cook alluded to in a recent interview.

Apple is set to report its fourth quarter earnings results on Wednesday, October 30 after the stock market closes.

StellarVixen
Doom. So much doom.

Doom. So much doom.


What would I give to be doomed like this...

It's all Tim Cooks fault and something about keyboards.
Score: 15 Votes (Like | Disagree)

ellsworth
I know it's childish to point fingers and those who said the iPhone 11 would bring Apple down so I'm not going to do that. They know who they are....
It appears iPhone 11 is doing so well, Apple had to ramp up it's production. That's awesome.
Score: 11 Votes (Like | Disagree)

How much exposure does Microsoft have in China? That’s what worries me about Apple.

China is a double edged sword, but it's overwhelmingly been positive to this point. China is around 20% of their revenue.

Microsoft fights China in the same ways through hardware production, and of course, piracy.

I love Microsoft, but their valuation today is questionable to me.

no hate just commonsense,
YES the new iphone 11 will sell great...
but the stock price is an other soap bubble waiting to burst again.
its all greed people trying to make a quick buck apple's profits are not that of a trilllion dollar companey not by a long shot that is why last year the stock hit rock bottom ....

You guys are priceless. If you bought AAPL last year, you'd be up huge.

Apple is more profitable than the other Trillion (Microsoft) or near trillion (Google, Amazon) companies. A lot more.

Apple makes about $60B in net income annually, making them a very cheap ~18X earnings at a $1T valuation. Microsoft makes about $33B annually and trades about 35X earnings. So talk about Microsoft before you even mention Apple.

Apple absolutely has the profits to back up their valuation and is probably the only company that actually justifies such a value.

Do your homework on fundamentals or don't bother talking about them.
Score: 11 Votes (Like | Disagree)

IllIllIll
Thank you Apple! Bought my first shares 12 years ago and have made close to 1300%.
Score: 9 Votes (Like | Disagree)
Read All Comments