Apple has asked suppliers to increase production of its new iPhone 11 and ‌iPhone‌ 11 Pro lineup by up to 10 percent, according to Nikkei Asian Review. The bump in production would add up to 8 million units to the current production plans as Apple seeks to meet stronger-than-expected demand. 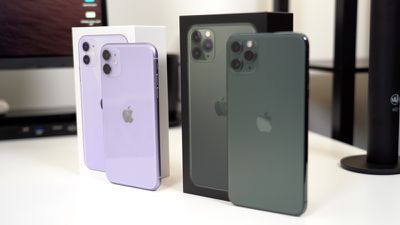 "This autumn is so far much busier than we expected," one source with direct knowledge of the situation said. "Previously, Apple was quite conservative about placing orders," which were less than for last year's new iPhone. "After the increase, prepared production volume for the iPhone 11 series will be higher compared to last year," the source said.

The report claims the ‌iPhone‌ 11 and ‌iPhone‌ 11 Pro are seeing the strongest demand, while Apple is actually revising orders for the iPhone 11 Pro Max down slightly as it seeks to balance production with demand.

Nearly every year, stories circulate about Apple cutting production in the months following the launches of new iPhones, but it's frequently unclear whether production cuts are due to weaker-than-expected demand or simply anticipated scaling back following the initial rush of orders. Regardless, an increase in production this year appears to be a good sign for Apple.

With the launch of three new ‌iPhone‌ models with improved cameras, Apple's ‌iPhone‌ lineup may be appealing to a broad array of customers ready to upgrade from older models, particularly with the ‌iPhone‌ 11 starting at $699, which is $50 less than its ‌iPhone‌ XR predecessor.

Those looking for an even more budget-friendly new ‌iPhone‌ may have some welcome news early next year, with multiple reliable sources indicating that Apple is planning to launch a new "iPhone SE 2" that would actually look very similar to the ‌iPhone‌ 8 but with upgraded internals such as Apple's latest A13 chip and 3 GB of RAM.

Arquet
was actually interested in the 11 pro max but the price in singapore is 2k for a 256gb model and 1.7k for a 64gb.

sorry but unless this phone can make me breakfast and wipe my ass, it is not worth 2k. not just the iphone, no phone is worth 2k.

for comparison, 2k can get me an asus zenbook with change for a 2019 ipad.

or 4 boxes of cuban cigars.

or 17 bottles of whisky.

or 13 bottles of quality cognac.

or stock up my entire bar.

or get drunk and die of liver failure in 1 night.

these would all be more viable choices than spending it all on a phone.
Score: 40 Votes (Like | Disagree)

The 15% iPhone Tariff hits on Dec 15th, & Apple needs to get as many 2019 iPhones as possible into the Sales Channel BEFORE then !!!

The units need to clear customs & NOT be in a Warehouse !

Two are the two main criteria, else they will get hit with the 15% tariff (starting on Dec 15th).

NOT a single so-called Pro Stock Analyst who covers AAPL for a living has yet picked up on this, NOR even a single Regular on CNBC !

A Fool & his Money are soon parted !

The tariffs haven't come out of the blue. It's been known for a long time. They wouldn't have waited until now, several weeks after launch, to up production, if what you are suggesting was true.

Edit: I too am seeing a lot of people lined up at the stores here to get one. Frankly, I'm quite surprised. All I was hearing was what a dud this year would be. Guess thats what I get when I come on MacRumors and read all the negativity and believe some of it.
Score: 29 Votes (Like | Disagree)

The 15% iPhone Tariff hits on Dec 15th, & Apple needs to get as many 2019 iPhones as possible into the Sales Channel BEFORE then !!!

The units need to clear customs & NOT be in a Warehouse !

Two are the two main criteria, else they will get hit with the 15% tariff (starting on Dec 15th).

NOT a single so-called Pro Stock Analyst who covers AAPL for a living has yet picked up on this, NOR even a single Regular on CNBC !

Underwhelming for who and who? Perhaps for those who own last year’s device (even that you cannot be sure), but there are many more upgrading quite older handsets. Again, who are the “most of the buyers” who plan or returning theirs? You must be some kind of wizard.

I think everyone assumes all people upgrading are on the most recent phones or something. If you have an xs max and aren’t super impressed by the 11, all I got to say is: well duh!! But for those with a 7 or older, this is one hell of an upgrade
Score: 14 Votes (Like | Disagree)

Brenster
Remember people, don’t feed the newly signed up troll who signed up only yesterday in order to troll.

Otherwise this bodes well for the 11 line. The reviews in the mainstream media, as opposed to the specialist tech press, have been most complimentary. I’ve just checked the in-store reservations for my own 11 model (11 Pro, silver, 256GB) and there is availibility at most Apple stores across the UK. I’m assuming that a significant chunk of the demand is coming from the carriers themselves.
Score: 10 Votes (Like | Disagree)

johnparjr
my local Apple store still has people lining up to get one
Score: 9 Votes (Like | Disagree)
Read All Comments