Multiple rumors have suggested Apple is working on an updated iPad Pro that could launch at some point this fall, and some of those rumors have said the next-generation version could potentially come with a triple-lens camera.

In mid-September, images of an iPad Pro dummy model with three cameras popped up, and with some help from Sonny Dickson, we got our hands on a physical model for our latest YouTube video.

Subscribe to the MacRumors YouTube channel for more videos.
We have a 12.9-inch dummy model of the third-generation iPad, but it's also expected to come in an 11-inch version much like the current ‌iPad Pro‌ lineup.

Design wise, the tablet is identical to the current ‌iPad Pro‌, with the exception of the triple-lens camera setup. As with the iPhone, the dummy model has a square-shaped camera bump that houses three lenses, which will presumably be the same lenses in the ‌iPhone‌ 11 Pro: ultra wide-angle, wide-angle, and telephoto. 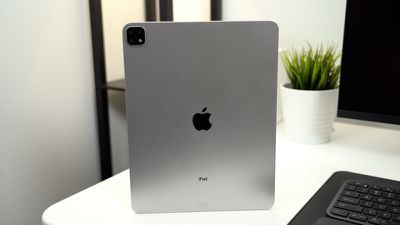 The design of the camera bump resembles the design we saw in some ‌iPhone‌ dummies ahead of the launch of the 2019 iPhones, and we don't think it's representative of what the cameras will actually look like should this year's ‌iPad Pro‌ be upgraded with an iPhone-style camera setup.

In all likelihood, the actual cameras would more closely resemble the look of the ‌iPhone‌ cameras with a square-shaped bump housing three distinct lenses.

Other than the triple-lens camera setup, the design of the dummy ‌iPad Pro‌ is identical to the current ‌iPad Pro‌ with 12.9-inch display, slim bezels, Face ID and no Home button, and a smart connector on the rear of the device.

Dummy models like these are often used by case makers to create cases ahead of the launch of new devices, because there can be a lot of money in being one of the first companies to come out with a case for a freshly launched product.

These dummy models are typically based on leaked schematics and info from the suppliers that make components and assemble Apple devices, so more often than not, when we see a dummy model, it's an accurate representation of what we can expect.

That said, there is some question about this ‌iPad Pro‌ dummy and we can't be entirely sure that the next-generation ‌iPad Pro‌ is going to get a triple-lens camera, mostly because we've heard so little about it.

Apple analyst Ming-Chi Kuo, who often provides accurate insight into Apple's product plans, has said that Apple is planning on an ‌iPad Pro‌ refresh this year but has given no detail on what to expect, while Bloomberg, another reliable source, has said that we can expect faster processors and "upgraded cameras," but it's not clear if "upgraded cameras" means a triple-lens camera system.

Japanese site Mac Otakara, which has a mixed accuracy record, is the source for the triple-lens camera rumors. Citing a Chinese supply source, ‌Mac Otakara‌ in August said that the new ‌iPad‌ Pros will feature the same camera system that's in the 2019 iPhones.

Rumors aren't clear on the camera setup of the new ‌iPad Pro‌, but they do agree on one point: a fall refresh is expected. Multiple rumors indicate some kind of new tablet is coming this year, but there's no solid information on when just yet.

Because we're still expecting new ‌iPad Pro‌ models, the already announced Mac Pro, and the much-anticipated and highly rumored 16-inch MacBook Pro, Apple may be planning to hold an October event as it has done in years past.

For more on what to expect from the ‌iPad Pro‌ update in 2019 and the bigger update rumored for 2020, make sure to check out our iPad Pro roundup.

hlfway2anywhere
This article could have been one sentence long:

"It's exactly the same as holding last year's model, but with a square camera bump."
Score: 13 Votes (Like | Disagree)

RamGuy
In other words its exactly the same in-terms of form factor and whatnot. It’s just the same camera shape and bump as the iPhone 11.

I love my iPad Pro 12,9-inch 2. Generation, but I have never used the rear camera. I can‘t think of any situation where I would only have my iPad at hand and not my iPhone. I suppose the improved camera would be great for users that might end up having a more up-to-date iPad as compared to their iPhone but otherwise how common is it to actually utilise this very often?

The front-camera seems like a much more likely scenario for me. You might use it for conference calls and what not.

Or is the camera upgrade more about AR than anything else?
Score: 8 Votes (Like | Disagree)

Yourbigpalal83
If its thicker and stronger then the current one, then its a purchase for me. I dont need it to be indestructible, just strong enough for day to day use!
Score: 8 Votes (Like | Disagree)

pdaholic
Upgraded/triple lens camera...I've had 2 versions of the 12.9 IPP, and don't think I've used the rear camera a single time on either.
Score: 7 Votes (Like | Disagree)

bluespark
I love the triple-camera array in the current iPhones, but I would love for the iPad Pro to be available with a single, flush camera good enough for document scanning only. An iPad that lays completely flat would be way better for me than one with a bump. (And I'm pro-bump when it comes to phones!)
Score: 3 Votes (Like | Disagree)
Read All Comments