Apple's next-generation iPad could gain a dual-lens rear camera while the next iPad Pro range could get a triple-lens array, according to a rumor out of China. 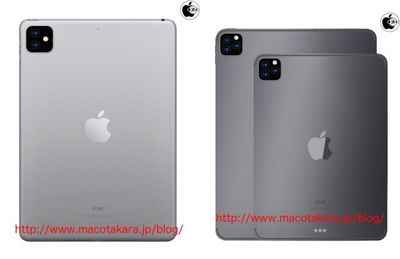 Japanese blog Mac Otakara cited a Chinese supply source over the weekend claiming the fourth-generation 11-inch and 12.9-inch ‌iPad Pro‌ devices will get the same multi-sensor array widely rumored to be coming to Apple's next iPhone range this year.

Meanwhile, Apple's rumored new version of its entry-level ‌iPad‌ – a device with a slightly bigger 10.2-inch screen than the existing 9.7-inch model – will inherit the dual lens setup currently seen in the iPhone XS and ‌iPhone‌ XS Max.

The new iPads will launch in October, claims Mac Otakara's source, who also said that diagrams of related accessories are "floating around," but they declined to specify whether they are Apple accessories or third-party ones.

Apple hasn't used dual-lens rear camera modules in any ‌iPad‌, let alone triple-lens arrays, so bringing the multi-sensor systems to three new models in the same year would be a first for the company.

Apple hasn't updated its third-generation ‌iPad Pro‌ lineup since October 2018 and its 9.7-inch entry-level ‌iPad‌ since March 2018, so we can reliably expect both to get some sort of refresh soon. Whether they will have the sort of multi-sensor cameras that are usually the preserve of smartphones is a different matter.

Infinite Vortex
I wonder how many use the rear camera on the iPad at all. I'm on my 4th tablet now and I don't think I've taken a single photo with any of them. I would be happy to do away with the rear camera, and hence camera bump, all together for an improved front facing camera any day.
Score: 30 Votes (Like | Disagree)

dzankizakon
I have the current iPad Pro 11" and the only complaint I have about the device is the camera bump. I couldn't care less about the quality of iPad's back camera. They could put 5 on the back and I'd still hate it for the bump.
Score: 22 Votes (Like | Disagree)

ruka.snow
If it’s coming to the iPad then it’s gotta be some new push to get augmented reality moving.
Score: 16 Votes (Like | Disagree)

Nismo73
They would change the camera just to get people to buy new keyboards.
Score: 14 Votes (Like | Disagree)
Read All Comments