Apple CEO Tim Cook is currently in Europe, and over the course of the last few days, he's visited Germany, France, and Italy. Earlier this week we shared an interview he did with a German news site, and today he spoke with a French newspaper and students in Italy as part of an appearance at the Osservatorio Permanente.

Cook commented on topics like journalism, privacy, and immigration, with his comments shared by Italian site Macitynet.it [Google Translate] and French newspaper Les Echoes (via CNBC). 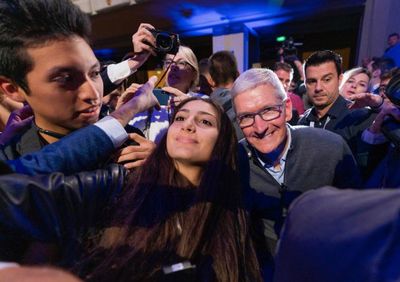 Image shared by Tim Cook on Twitter
According to Cook, while the internet has brought "many positive things," fake news is one negative. From a translation of the original interview:

All of us lovers of democracy and freedom must think that separating the false from the true is the basis of freedom. Quality journalism is the foundation of every democracy and an open and free press is essential.

Cook also spoke about a topic that he's covered many times in the past - privacy. He reiterated his belief that Apple customers are not Apple's product, and that Apple will not sell customer data. "At Apple, we will never treat you as products but as customers with dignity and respect," he said.

Along with touching on privacy, Cook highlighted Apple's environmental efforts, such as the fact that Apple is run on 100 percent renewable energy, and he spoke on human rights. "We do not do it because it's required by regulations, but because it is a moral imperative," he said.

Apple supports immigration because wealthy countries must "accept migrants who are fleeing difficult situations," said Cook. Cook added that he would like for young people and children to be able to stay in the United States to study, referencing his support for DACA, or the Deferred Action for Childhood Arrivals immigration policy.

Cook had advice for students regarding smartphone usage. "Smartphones must bring you closer to those who are far away - don't leave those close to you," he said. "If you spend more time looking at your smartphones than people's eyes, you're wrong."

Cook also spoke about cryptocurrency according to CNBC, with statements originally shared by French site Les Echoes. Cook said that currency should stay in the hands of countries, and private companies should not look to gain power with cryptocurrency.

"No. I really think that a currency should stay in the hands of countries. I'm not comfortable with the idea of a private group setting up a competing currency," he said.

"A private company shouldn't be looking to gain power this way."

Apple's vice president of Apple Pay Jennifer Bailey recently said that Apple is "watching" cryptocurrency in regards to potentially supporting it in the future, but said that the company is primarily focused on what consumers are using today.

Naraxus
Typical. Timmy goes to Europe or sendout screeds here at home lecturing on privacy but happily gets on his knees & shuts up when he goes to Beijing...

Timmy needs to be removed asap
Score: 23 Votes (Like | Disagree)

0989382
Remember when Steve Jobs did rare interviews and he’d talk about Apple, the Mac, the iPod and iPhone? I loved that. But more importantly, he loved that. And he was right about Apple and he knew what he was talking about. I like Cook, but his opinion on those topics is genuinely worth no more than yours or mines. Only difference is if he cares about immigration he can save money in Apples operations...
Score: 21 Votes (Like | Disagree)

mcfrazieriv
I recall Steve Jobs sitting on a humble wooden stool, wearing the same outfit he had worn for a decade, drilling the concept of his products into the minds of those willing to listen on the various media outlets. His passion and love for revolution and his obsession for chasing that perfect solution to real product problems was what got Apple moving in the right direction after years of management creating a sleeping beast.

Tim likes his steel, glass and stone fortresses ... his expensive wooden boxes in his Apple Groves ... and his big political ideas. He likes his incredible pipeline that we've heard about for the greater portion of a decade. He likes his profits on evolutionary products, his large salary and his huge bonus. Tim, why not let the ship sail with fresh leadership equally obsessed with product innovation as Jobs, and take on the role of a full time politician?

tom5304
God I wish Tim Cook would just shut up and try to do a better job running his company.
Score: 17 Votes (Like | Disagree)

JosephAW
Hello! The federal reserve is a privately run with unelected officials controlling the money.
Score: 15 Votes (Like | Disagree)

tgwaste
Hey Tim Crook. We'll be sure to send the migrants to your home. I'm sure you'll welcome them with open arms.

Libbies will Yap Yap Yap until it effects them.
Score: 14 Votes (Like | Disagree)
Read All Comments

Sunday August 14, 2022 3:28 pm PDT by Joe Rossignol
Apple's second-generation AirPods Pro are finally nearing launch, with a release expected later this year. If you are considering upgrading to the new AirPods Pro once they are released, keep reading for a list of five new features to expect. In addition to all-new features, the second-generation AirPods Pro will likely adopt some features added to the standard AirPods last year. H2 Chip ...
Read Full Article • 117 comments