Well-known leaker Ben Geskin today tweeted a photo of what he claims are front glass panels for Apple's widely rumored trio of new iPhones, all of which are expected to be announced in September as usual.

The lineup is expected to include a second-generation iPhone X, a so-called iPhone X Plus, and what will essentially be a budget iPhone X, with 5.8-inch, 6.5-inch, and 6.1-inch screen sizes respectively.

Geskin tweeted a second photo of the front glass panels with wallpapers, providing a realistic visualization of the 2018 iPhones.

As he depicted in mockups last month, Geskin says the 6.1-inch model with an LCD panel will have slightly thicker bezels compared to the iPhone X and iPhone X Plus, which are expected to have OLED displays.

A similar photo was uploaded to Slashleaks by user Dimitri12, providing a closer look at the thicker bezels on the 6.1-inch model. 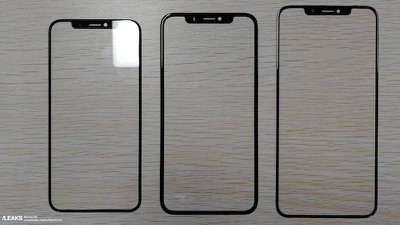 All three devices are expected to feature edge-to-edge displays with a notch for the TrueDepth sensors that enable Face ID.

The new lineup of iPhones should be unveiled in just a few months, likely alongside larger-display Apple Watch Series 4 models, new AirPods, Apple's multi-device charging mat AirPower, and other announcements.

berrymetal
I still don't understand how a "budget" iPhone will be larger in screen size than the (smaller) high end iPhone
Score: 18 Votes (Like | Disagree)

The more expensive ones would have a higher quality screen, better camera, possibly faster processor and more RAM. Storage could be different (32/128 vs 64/256 GB). Screen size isn't all.
Score: 13 Votes (Like | Disagree)

Lmaoo how does this look disappointing? What?

I've seen a 2 carat diamond that was cheaper than a 1 carat diamond. At the same store (each costing the same as ten iPhones). The 1 carat was best colour, best cut, and absolutely faultless.
Score: 6 Votes (Like | Disagree)
Read All Comments

Sunday August 1, 2021 6:21 am PDT by Sami Fathi
Models of the Apple Watch Series 6 with titanium cases part of the "Apple Watch Edition" collection is currently widely unavailable for pick-up in several of Apple's retail stores in the United States and is unavailable entirely for delivery in major markets. Noted by Bloomberg's Mark Gurman in the latest edition of his "Power On" newsletter, titanium models of the Apple Watch Series 6,...
Read Full Article • 154 comments