tvOS 13 can be downloaded over the air through the Settings app on the ‌Apple TV‌ by going to System -> Software Update. ‌Apple TV‌ owners who have automatic software updates turned on will be upgraded to tvOS 13 automatically. Apple has also released an ‌Apple TV‌ Software 7.4 update (actually version 8.4.3) for the third-generation ‌Apple TV‌. 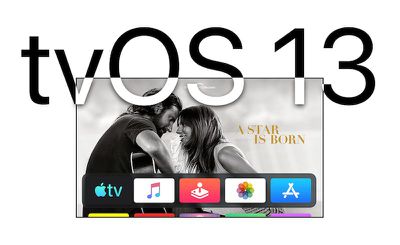 The tvOS 13 update brings an updated Home screen aimed at making it easier to discover new content. Apps are now able to play full-screen video previews on the Home screen, similar to Netflix, once developers have implemented support.

Multiple users are supported for the first time, letting more than one profile exist on the ‌Apple TV‌ so each family member can have their own customized ‌Apple TV‌ interface with separate recommendations, music playlists, and Watch Now lists.

For ‌Apple Arcade‌, Apple has implemented support for the Xbox Wireless Bluetooth Controller and the PlayStation DualShock 4 Controller, both of which can be connected to an ‌Apple TV‌ over Bluetooth.

Sign in with Apple, a feature also available on the ‌iPhone‌, iPad, and coming to Macs, is included in tvOS 13. With tvOS 13, apps that support Sign in with Apple will let you sign in with your Apple ID rather than requiring you to create a user name and password.

Apple can even obscure your real email address and provide a fake one, which keeps your data and information safer than ever.

There are new under the sea themed screensavers created in partnership with the BBC Natural History Unit, which also created "Blue Planet."

With a new Picture-in-Picture feature, you can continue to watch TV shows or movies while using a different app, adjusting settings, or otherwise navigating through the tvOS 13 operating system.

For more on what's new in the tvOS 13 update, make sure to check out our tvOS 13 roundup.

Sure hope we can disable that nonsense.
Score: 16 Votes (Like | Disagree)

Solomani
Xbox and DualShock controller support for Apple TV! A step in the right direction, Apple.
Score: 8 Votes (Like | Disagree)

Did you check under Accessibility? Sometimes they hide stuff like that there.

You, Sir, are a genius. ;) Under Accessibility/Motion the video previews can be turned off. The apps still rotate through still images, but that’s less annoying.
Score: 7 Votes (Like | Disagree)

Rigby
Just updated one of my ATVs and encountered the first UI annoyance already: in the previous version, the "top shelf" of the TV app on the home screen would show the first few entries of may watch list. Now it shows some random movie poster fullscreen in the background (essentially an ad), so I can no longer directly jump to an item on the watchlist. Is there any way to configure this? Not a fan of the new home screen so far.
Score: 6 Votes (Like | Disagree)

unfunfionn
I've been on the public beta for a couple of months. When I first saw the top shelf ads, I thought it can't be serious, but surely they'll make it optional by the GM. Turns out they were serious and they didn't listen. I'm sure some users will like this feature, but there is an ethical concern that makes me a little worried. This is a €200 device, the premium device in this market, and they're putting advertisements on the home screen. As long as that content is stuff you have to spend additional money on, they're ads. I was already annoyed that my Samsung TV makes it impossible to remove TV Plus (and keeps pinning it to my Home menu no matter how often I remove it), but it mostly stays out of the way. The tvOS ads are far worse.

But honestly it annoys me with the Music app more than the TV app. The TV app was barely useful to begin with. Its only useful feature for me was Up Next in the top shelf. Now it can just go into a folder and die. But I use Music heavily and instead of having a shortcut into albums I deliberately added to my library, I get video previews for Taylor Swift, the Jonas Brothers and Ariana Grande. I don't listen to any of those artists and have no intention to. They're not recommendations based on my listening behaviour either.

It's business goals being brute-forced onto a paying customer base. Yes, worse things can happen in an OS update, but this approach feels quite concerning.
Score: 5 Votes (Like | Disagree)

So we’re going to lose all of the birds eye videos? I love the NY and Dubai videos! And I can’t tell you how much time I’ve spent waiting to see the Santa Monica amusement pier. Or wondered why the light over France is a different color than that over England.

I really wish Apple would let us pick and choose (up to ten?) Aerials screensavers to cycle, rather than get completely random ones, often times overwriting one's favorites.
Score: 4 Votes (Like | Disagree)
Read All Comments