watchOS 6 can be downloaded for free through the dedicated Apple Watch app on the iPhone by going to General -> Software Update. To install the new software, the Apple Watch needs to have at least 50 percent battery, it needs to be placed on a charger, and it needs to be in range of the ‌iPhone‌. 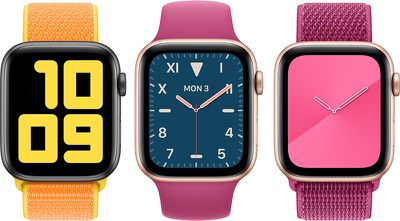 watchOS 6 at release is limited to the Series 3 and Series 4 Apple Watch models, with Apple planning to release the update for Series 1 and Series 2 models at a later date.

watchOS 6 is a major update that offers quite a few new features for Apple Watch owners. There's a dedicated App Store available on the Apple Watch for the first time, allowing apps to be downloaded on the Apple Watch independent of the ‌iPhone‌. Developers can now create apps that run on Apple Watch without an ‌iPhone‌ element.

Apps can take advantage of new APIs so you can do things like follow along with a workout or listen to streaming music from third-party services, and some built-in Apple Watch apps can be removed now that they're not tied to the ‌iPhone‌.

There are multiple new watch faces in watchOS 6, including Numerals Mono and Duo with large numbers, Modular Compact, a new Gradient watch face that shifts over the course of a day, a Solar Dial that visualizes the sun in a 24 hour path around the dial, and a California watch face with a mix of standard numbers and roman numerals.

Taptic Chimes offers up a silent touch on the wrist at every hour, and with sound activated, there's also an audible chime. Holding two fingers on the Apple Watch's display speaks the time aloud.

There's a new Noise app for measuring the noise level of the environment you're in, sending a notification if the sound is loud enough to damage your hearing. There's also a new Cycle Tracking app for tracking menstrual cycles.

Several iOS apps have been ported over to the Apple Watch in watchOS 6, including Audiobooks, Calculator, and Voice Memos. There are new complications you can add to watch faces, including decibel level, cellular strength, rain probability, and more.

Siri can now pull up full webpage results, displaying the info right on the wrist, and ‌Siri‌ can look up song lyrics using Shazam even when your ‌iPhone‌ isn't nearby.

The new Animoji and Memoji stickers from the Messages app work on the Apple Watch, and for Mac users, the Apple Watch can approve some Mac security prompts.

For more on watchOS 6, make sure to check out our watchOS 6 roundup.

Hmm how you know?

The forums are a better place to get news than the front pages. Haha. Never would have guessed that lol.
I have more respect for posts after something occurs and is factual instead of putting it out first. Or maybe even say coming today and out the release notes and then publish updated, it’s now out kinda like they did the beta posts.
This was just not posted very accurately.

This is MacRumors. Not MacFacts! lol
Score: 4 Votes (Like | Disagree)
Read All Comments

Monday September 26, 2022 7:34 am PDT by Sami Fathi
Today marks exactly two weeks since Apple released iOS 16 to the public. Besides the personalized Lock Screen, major changes in Messages, and new features in Maps, the update has also seen its fair share of bugs, performance problems, battery drain, and more. After major iOS updates, it's normal for some users to report having issues with the new update, but such reports usually subside in...
Read Full Article • 229 comments