Apple this week quietly updated the HomePod's product page on Apple.com, including a few release dates for upcoming features (via 9to5Mac). HomePod will gain the ability to tune into live radio stations through Siri controls on September 30, after this feature was first announced at WWDC in June (and made available to some users in Germany this July). 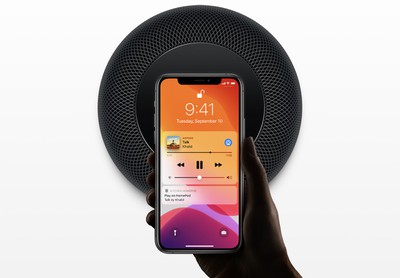 Additional ‌HomePod‌ features, including multi-user support and music handoff, will not launch until "later this fall." With iOS 13, ‌Siri‌ on ‌HomePod‌ can recognize the voices of different ‌HomePod‌ users, queuing up each person's favorite music on the speaker. Handoff lets any media you have playing on your iPhone or iPad be handed off to the ‌HomePod‌.

One new feature has also been added to the ‌HomePod‌ page on Apple.com, called "Ambient Sounds." Apple says that you'll be able to relax to sounds like ocean waves, forest birds, rainstorms, and more with this feature, also coming in the fall.

It sounds like the company is working on making ambient noise a big new feature of the ‌HomePod‌, after being requested by users since the speaker launched in early 2018. Although Apple Music has a multitude of ambient noise playlists, this should make it even easier to start playing relaxing sounds on ‌HomePod‌.

There have been numerous announcements from Apple this week thanks to the ‌iPhone‌ event yesterday, including the all new iPhone 11 family, the new 10.2-inch iPad, and Apple Watch Series 5.

Apple pushing back even more software releases and features at the last minute. What is going on over there?

Damned if they do, damned if they don't. Release too early and we don't forgive them for software issues and security flaws. Delayed, we give them vitriol over having to wait for new features and advancements.

I am glad to see them slow down with some of the mass releases in hopes they kill bugs before they impact our devices.
Score: 17 Votes (Like | Disagree)

scamper
I’m sure I’m an outlier, but I use HomePod for ambient sounds as much as for anything else. When I’m writing and want to block out the neighbors, nothing (at the moment) beats “Hey Siri, play ‘Brown Noise without fade,’ on repeat.” (“Without fade” to differentiate this “song” from a competing one that has an annoying fade out at the end.) It’s a warm, lush sound, thanks to HomePod’s excellent bass response, that insulates me from the world.

H3LL5P4WN
I'm actually pretty excited to see whats on tap for ambient sounds. I might have to pick up another pair to put in the bedrom if they're that good.

I can’t believe radio station streaming wasn’t one of the original features. That’s one of my main uses for my Echo speaker - listening to live NPR news.

The main use for your Echo speaker is for Amazon to listen to everything you say and do.
Score: 12 Votes (Like | Disagree)

Unity451
I honestly forgot the HomePod even existed.
Score: 11 Votes (Like | Disagree)

cipher29
So much hate for the HomePod... I absolutely love the 4 that I have in my house.. I have full intentions to double that number in the coming year..

They sound amazing and work as advertised IMO .. If it's not a product that's up your alley, not sure why people have to unleash their hate for all the world to see - especially on a product they don't even own ...

I have zero intensions on buying a mini-van - perhaps I should seek out all the mini-van forums and tell everyone how much they suck... smh...
Score: 10 Votes (Like | Disagree)

I keep hearing about all of these "new features" with Siri, yet she cannot do even the most basic tasks correctly. Is Tim Cook living in a fantasy world?

I’ve been using my HomePod for about a year and a half and Siri works great.

How long have you been using yours?
Score: 6 Votes (Like | Disagree)
Read All Comments

Thursday May 13, 2021 12:10 am PDT by Sami Fathi
Apple has fired Antonio García Martínez, an ex-Facebook product manager and author of the controversial book "Chaos Monkeys," following public and internal calls for removal and investigation due to past misogynistic statements, The Verge reports. Apple hired Martínez earlier this week to join its ads team, however, comments that Martínez made in the past sparked condemnation from users...
Read Full Article • 308 comments