At WWDC in June, Apple said iOS 13 would bring live radio requests to Siri from iHeartRadio, TuneIn, and Radio.com, but it looks like that rollout is already underway ahead of the software's release in the fall. 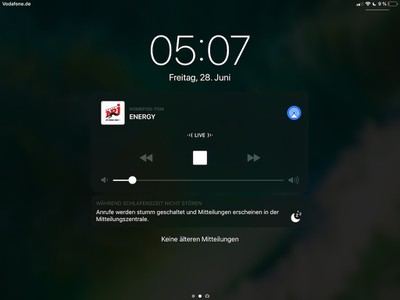 Image via Macerkopf.de
Macerkopf.de this morning reports that some users in Germany are having success asking Siri to play live national radio stations over HomePods running the latest official software and via Apple Music on devices running iOS 12.

It's not clear how far the company has got in laying the groundwork for live radio ‌Siri‌ requests elsewhere, but Apple says that come the official global rollout in the fall, Apple device owners will have around 100,000 radio stations to choose from.

Other new features destined for HomePod this fall include Handoff for music, podcasts, and phone calls, as well as individual voice recognition for up to six users.

Apple says the latter feature will enable a personalized listening experience and personal access to messages, reminders, lists, and calendars, as well as the ability to make phone calls from the user's contacts.

no one cares. Stick with your surveillance hardware.
Score: 4 Votes (Like | Disagree)

I would like this on my iPhone natively. If the iPod could do it would love my phone too.. Surely with all the antennas in there it can pick up radio. Just saying, even in emergencies it would be useful, instead of relying on an app and data.

I'd like it too but to clarify it sounds like this is about internet radio. Actually picking up FM/AM stations via radio waves isn't supported, it sounds like, and instead this is live-streaming via wifi or mobile data.
Score: 2 Votes (Like | Disagree)

iLoveDeveloping
I would like this on my iPhone natively. If the iPod could do it would love my phone too.. Surely with all the antennas in there it can pick up radio. Just saying, even in emergencies it would be useful, instead of relying on an app and data.
Score: 1 Votes (Like | Disagree)

DannyBres
Anyone know if BBC stations will work?
Score: 1 Votes (Like | Disagree)

MNWildFan
Working for me too, but it seems to be hit or miss depending on where the station is being sourced from. A majority of the stations in my area (Minneapolis/St. Paul, MN) are on iHeart, so those all work fine. Recently tested it out with one of the stations in the area (KTCZ/Cities 97.1) and it worked like a charm! Radio.com stations (for the most part) are working too. The only ones I seem to be having trouble with are the TuneIn ones so far.
Score: 1 Votes (Like | Disagree)

Non of my local channels seem to work.

Happy that at last we have an easy way to listen to "Normal" Radio, Hardware Radio on the iPhone should have long time ago be enabled, now it needs data, if they just had the (Hardware) radio enabled by default it would not cost people any data.
Score: 1 Votes (Like | Disagree)
Read All Comments

Sunday June 20, 2021 4:15 am PDT by Tim Hardwick
A wireless network naming bug has been discovered in iOS that effectively disables an iPhone's ability to connect to Wi-Fi. Security researcher Carl Schou found that after joining a Wi-Fi network with the name "%p%s%s%s%s%n" his iPhone's Wi-Fi functionality was left "permanently disabled." Changing a hotspot's SSID did nothing to correct the problem, with even a reboot failing to make a...
Read Full Article • 130 comments