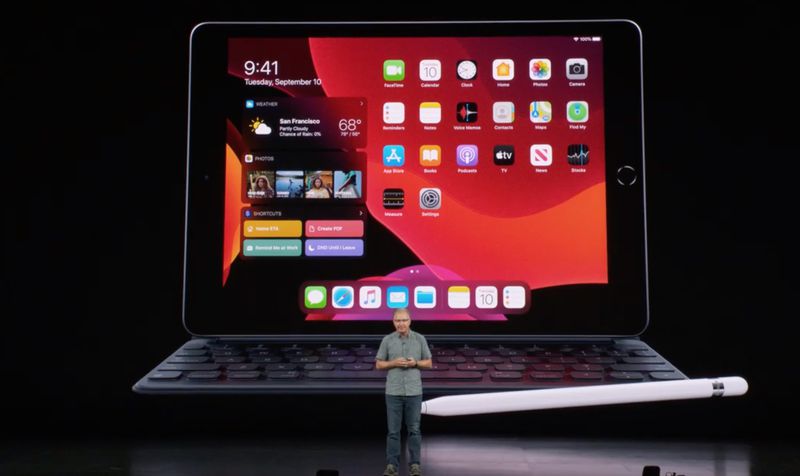 The new ‌iPad‌ includes an A10 Fusion chip, support for the first-gen Apple Pencil, and a Smart Connector for attaching Apple's Smart Keyboard.

"The new ‌iPad‌ packs even more value into our most popular and affordable ‌iPad‌ model featuring a bigger 10.2-inch Retina display, support for ‌Apple Pencil‌ and for the first time, the full-size ‌Smart Keyboard‌," said Greg Joswiak, Apple’s vice president of Product Marketing. “The new ‌iPad‌ was built to run iPadOS, which introduces powerful new ways to multitask, manage and mark up documents, use ‌Apple Pencil‌ and view more information at a glance on a redesigned Home screen. This new ‌iPad‌ with ‌iPadOS‌ takes everything people love about our most popular ‌iPad‌ and makes it even better for creating, learning, working and playing."

The new seventh-generation ‌iPad‌ comes in silver, space gray and gold finishes in 32GB and 128GB configurations. ‌iPad‌ starts at $329 for the Wi-Fi model and $459 for the Wi-Fi + Cellular model.

Apple's most affordable ‌iPad‌, which is made from 100 percent recycled aluminum for the first time, starts shipping September 30, and orders start today.

scrapesleon
At this point this very keynote will go down as the worst in history
Rating: 11 Votes

Oh this is GREAT for young artists. A slightly bigger screen on the lowest end iPad is very good news!

shocked people can hate on this--it's an amazing buy! And pencil 1 is still great
Rating: 5 Votes

malko
"A10 Fusion chip", haha. Barely an upgrade from the 1,5 year old 6th gen iPad at all. Same chip, same format (but a hair bigger screen), still 1 gen pencil, same price. If the price was good 1,5 year ago it's not today anymore. No new iPad for me this year either...
Rating: 5 Votes

I can now retire my iPad 2.


My sister is still using my iPad 2 as a facebook live streamer and mini TV. It's a great device that hopefully will last a few more years.
Rating: 5 Votes

I have a decision to make. My 11 year old is gonna get an iPad this fall.

That extra $80 would just about pay for the pencil.

I wonder what the differences are between the 6G and 7G?

Other less important items would be (for me) ...


Just get the iPad 6...you'll have a better choice of cases from the get go.

In response
1. It doesn't matter, it won't be appreciably faster either way.
2. Doubt it, but too soon to know. 2GB is fine, sure 3GB would be nicer, but not the end of the world.
3. The iPad 7G is almost identical to the 6G and both will age out at the same time. Plenty of people in these threads are using iPad 2 and Air 2, so I'm not sure I see the concern.

1. TouchID - Either is fast enough
2. Bluetooth 4.2 - annoying, but not the end of the world either.
3. Wi-Fi - same specs as the iPad 6, most likely no faster at all. Still tops out at 866Mbps. LTE is faster with additional bands supported.

Your 11-year old won't know the difference and he'll have a Pencil to boot...just my 2¢.
Rating: 4 Votes

AppleorSamsung
Can we at the very least get some new hardware
Rating: 3 Votes

Criticism isn't hate. Jews were hated during the Holocaust. Blacks endured hatred during the civik rights era. You don't know what true hatred is.
Rating: 3 Votes