At WWDC 2019, Apple announced Offline Finding, codenamed Blue Avengers, as one of the new features of iOS 13 and macOS Catalina. It allows users to find their devices even when their lost devices are not connected to the internet. 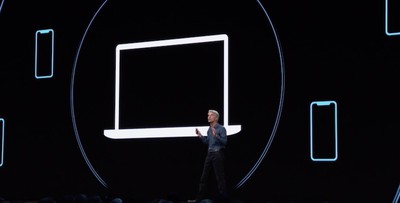 A background process called Search Party intermittently broadcasts and receives Bluetooth beacon signals so that every nearby online device running iOS 13 or macOS Catalina can relay the location of lost offline devices to their owners. Offline Finding even works if the device is asleep, in which case the device enters a "dark wake" state to broadcast a Bluetooth beacon signal. Apple uses public key encryption and rotates the public key to keep everyone's location information secure and private.

Beyond the ability to find devices themselves, Apple is rumored to be planning to compete with Tile and announce a small Bluetooth beacon device that uses the same Offline Finding technology as iOS 13 and Catalina devices. This small beacon device could be attached to personal items such as keys, purses or wallets so that the owner could find them even when out of range of the items. An ARKit "star" image discovered in the Find My app bundle hints at the possibility of using augmented reality to find lost devices or items, similar to Pixie Tracker.

WTF - who wants this stuff. Get your house in order with your core products.

iMaK18
I desperately want them to come out with this.

Tile was a great idea. I was even one of the backers for it on Kickstarter and I’ve had them since launch.

But after using them for all these years, I’ve grown to dislike them. The batteries don’t last worth a damn, and they put off making a rechargeable or replaceable battery for so long because they want to milk everyone for money.
Then they finally do it and change their business model to Subscription.

I’m done with them. They are trash and greedy bastards.

I love when Apple sticks their nose into other industries because they always disrupt it in a very positive way. And in some cases, put obsolete companies out of business who over stayed their welcome. All for the better.

I hope one day, Apple is the only company I need in my life. I don’t like monopolies, but if it’s done right, it may not be a bad thing.
Score: 26 Votes (Like | Disagree)

WTF - who wants this stuff. Get your house in order with your core products.

I would love this. I'd stick it on my kid's wallet, put one in her school backpack, sew one into her school jacket, and put one on every other thing she is constantly misplacing.

Heck, if they give these things the ability to beep, I'd stick 'em on my tv remotes too.
Score: 23 Votes (Like | Disagree)

Find my keys? Find my wallet? Are we so A.D.D. that we need tech to do the light lifting for us too? At this rate, the screen generation is going to have full blown dementia by their fourties.

I, for one, am shocked people don't walk down to the creek with a washboard to do their laundry anymore - how is everyone in such a hurry that they can't spend 6 hours doing their laundry? This generation is so technologically dependent they can't even read a sundial, pathetic.
Score: 22 Votes (Like | Disagree)

Hopefully, it will be more reliable than Tile. Tried Tile twice over the years. Both times, the Tile had a high rate of not responding making it a waste.

If it can use every iOS device as part of the mesh network, the hit rate should be much much higher than tile.
Score: 16 Votes (Like | Disagree)
Read All Comments

Friday May 7, 2021 1:51 am PDT by Tim Hardwick
An early look at an ongoing analysis of Apple's App Tracking Transparency suggests that the vast majority of iPhone users are leaving app tracking disabled since the feature went live on April 26 with the release of iOS 14.5. According to the latest data from analytics firm Flurry, just 4% of iPhone users in the U.S. have actively chosen to opt into app tracking after updating their device...
Read Full Article • 166 comments