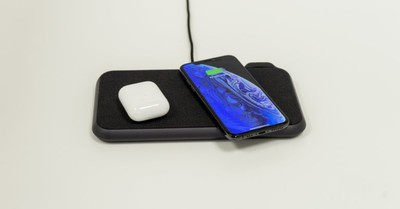 Other wireless charging mats released to date have fewer coils, resulting in devices needing to be placed in specific spots on the mat to charge.

This is the closest alternative we have ever seen to Apple's canceled AirPower mat, which would have been able to charge three devices placed anywhere on the mat, including an iPhone, Apple Watch, and AirPods. Of course, the ZENS mat will not have the same level of software integration with Apple devices.

Apple canceled the AirPower in March, noting that "after much effort," the mat failed to achieve its "high standards." An earlier report from Sonny Dickson claimed the ‌AirPower‌ would have been equipped with 21 to 24 coils, but reports claimed the mat suffered from overheating and potentially dangerous electromagnetic interference issues.

ZENS says the mat will be available in November for $139.99, with a limited edition version with see-through glass set to be offered for $179.99.

So if these guys can do it, why couldn't Apple? What's different here?

Apple intended to use 32 coils and charge 3 devices.

Plus, nobody knows if this charger will have any heat issues. It's still early.
Score: 38 Votes (Like | Disagree)

Tommo66
Call me pedantic, but both these mats have wires. Truly can't see the point in having to put a device on a mat to charge as really no more convenient than plugging it in to an cable in the same location. Only place I can see a use is in a car, place it in a compartment in the centre console and have it charge while you drive.
Score: 23 Votes (Like | Disagree)

So if these guys can do it, why couldn't Apple? What's different here?

Buran
So if these guys can do it, why couldn't Apple? What's different here?
Score: 18 Votes (Like | Disagree)

Call me pedantic, but both these mats have wires. Truly can't see the point in having to put a device on a mat to charge as really no more convenient than plugging it in to an cable in the same location. Only place I can see a use is in a car, place it in a compartment in the centre console and have it charge while you drive.

If you've actually used a wireless charger, you would know the difference. I have one at work and it really is much easier to just drop the phone on the charger when I sit and just grab when I go instead of plugging in and out. I still use the wires at home when I really only plug in overnight.
Score: 15 Votes (Like | Disagree)
Read All Comments